It was a lovely sunny morning at the end of August when we set off from Abercraf in a westerly direction. We walked along the river, the sun sparkling on the water. Passing through a kissing gate we noticed that its ‘gate’ had been dumped in the bushes nearby. Soon we were passing the Rheolau Arms and walking along the road in baking sunshine. We entered woodland, appreciating the shade and walked amongst the gnarled trunks of ancient trees. It was hard going underfoot at times, as it was quite boggy with no signs of a marked path and we climbed over or through a fallen tree. We came into open countryside and then arrived at the village of Cwmgiedd. 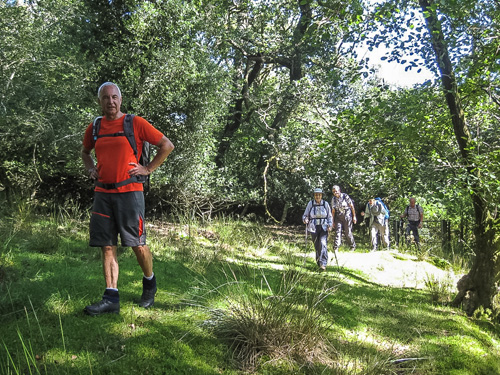 In 1943 ‘The Silent Village’, a British propaganda short film in the form of a drama documentary was made in Cwmgiedd as a tribute to the people of Lidice in Czechoslovakia. It was a collaboration of the Czech Ministry of Foreign Affairs, South Wales Miners Federation and the people of the Swansea and Dulais valleys. Part of the film is in Welsh with no subtitles. The 36 minute film is available on YouTube – just search for ‘1943 film The Silent Village’. In 1941 the villages of Cwmgiedd and Lidice were similar mining communities, though 984 miles apart. The film depicted what might have happened to the Welsh mining village if German Fascists had occupied it. The obliteration of the Welsh community is intended to parallel the events in Lidice the previous year.

On 27th May 1942 Jozef Gabcik & Jan Kis attempted the assassination of Reinhard Heydrich and he died of his injuries on 4th June 1942. Hitler demanded retribution and on 10th June Lidice was razed to the ground. All the 173 men of the village were executed, the women were taken to concentration camps and the children herded into trucks. To this day the fate of the children is unknown, only a handful ever returned home.

In 1947 ‘Lidice shall Live’ funds were handed over to Czechoslovakia and a new Lidice rose from the ashes, a foundation stone being laid 300 metres from the original site. It was noticed that corn in a particular field grew higher than elsewhere and horses refused to work there. This was the site of the mass grave, which is now home to a memorial.

In 1969 sculptor Marie Uchytilova was deeply touched by the tragedy and made it her life’s work to create bronze monuments of every child killed in Lidice. She completed the casts in 1989 and died suddenly later that year. Her husband completed the bronzes in 2000 and 82 statues now stand proudly in Lidice, looking down the valley. In 2015 a pear tree sapling (of a pear tree that was destroyed but regenerated) was handed over to the people of Cwmgiedd. It remains a living, permanent link between Cwmgiedd and Lidice.

Walking through the village we spotted a whole hedge of rosehips. At the northern end of the village we entered Coedwig Giedd forest. We followed forestry tracks along the river Giedd, though we couldn’t see it most of the time as it was hidden by trees and below us. We rested for lunch on some large rocks most of us seeking shade, as it was 27degC. 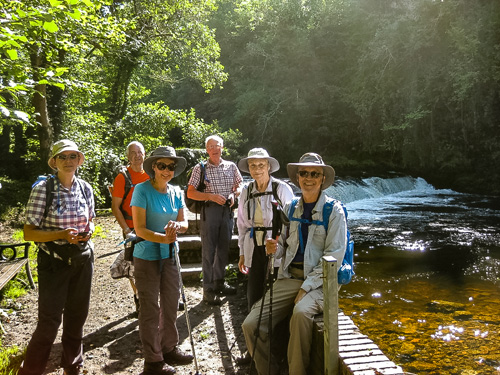 Emerging from the forest we crossed Nant Ceiliog and some boggy ground aiming for the rocky outcrop at Cribarth. We were surrounded by untouched wilderness with no sign of man’s influence in any direction (apart from the ubiquitous wind turbines in the far distance). It was well worth the climb – unusually we had climbed gradually until early afternoon. We disturbed a frog and then a newt in the long grass and realised that normally this area was a lot wetter underfoot – thank goodness for the dry summer.

Now we turned generally south and dropped quite quickly through the purple haze of heather laden hills with a patchwork of fields in the distance. Soon we were enjoying refreshment in the Abergraf Inn.