Footsteps on the Severn Bridges

Our plan to walk between the two Severn bridges, was postponed due to lockdown so we were going to go for it despite a wet weather forecast. We parked at Portskewett and set off in a north-easterly direction on a course parallel with the river but a short distance inland, we caught glimpses of the 2nd Severn crossing (the Prince of Wales bridge). The route took us through fields and past huge electricity pylons ‘marching’ across the countryside.

On a slight rise there is a group of stones and we climbed to look at them. We watched a group of long tailed tits flitting between trees. A herd of bullocks with their mothers and gorgeous coats of various warm shades of brown followed us along a fence. We climbed onto a low bank and found a small harbour with 6 boats stranded in mud – it was low tide. Starlings flew in clouds and landed on one of the electricity pylons, even knocking each other off to claim a chosen perch.

Now we headed towards the railway. This is a mainline, we had heard quite a few trains, and were careful crossing but as the track is straight, although misty rain was falling, we could see a long way.

Reaching the river, we were on the Wales Coast Path and could see the 1st Severn bridge to the north and the 2nd crossing (completed 1996) to the south. Looking towards England we caught glimpses of brightness coming our way through very dark clouds. Nearing the new bridge, there is a small island with a beacon and the nuclear power station was just visible. 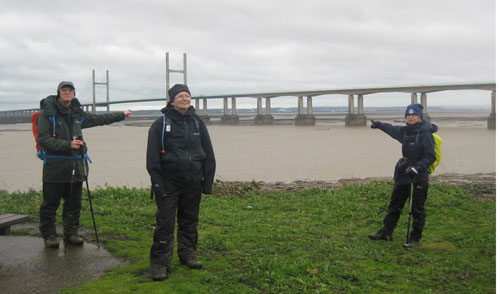 Rocks underlying the Severn estuary are old red sandstone and carboniferous limestone, the same ancient rocks which form the Brecon Beacons. 15,000 years ago, this area was untamed grassland and forest. Early Britons lived and hunted here but global climate change at the end of the last Ice Age transformed it. Increased temperatures caused Ice sheets to melt, leading to major rises in sea levels and the result is the estuary we see today.

It is easy to forget as we trundle across the bridges to England that crossing the River Severn has been a challenge for centuries – even the Romans were regular users ferrying legions across to Aust. The Severn Railway tunnel was built by the Victorians, connecting Sudbrook with England, at a cost of £2 million, it opened in 1896.

At Black Rock we stopped for lunch and the heavens opened, rain hammering down. It was here that the ferry, established in 1930s, crossed to England. This avoided the drive up to Gloucester though at times queues (possibly of several hours if you missed the tide) could mean no time was saved. It stopped when the bridge opened in 1966 (initial toll 2s6d – 12.5p). 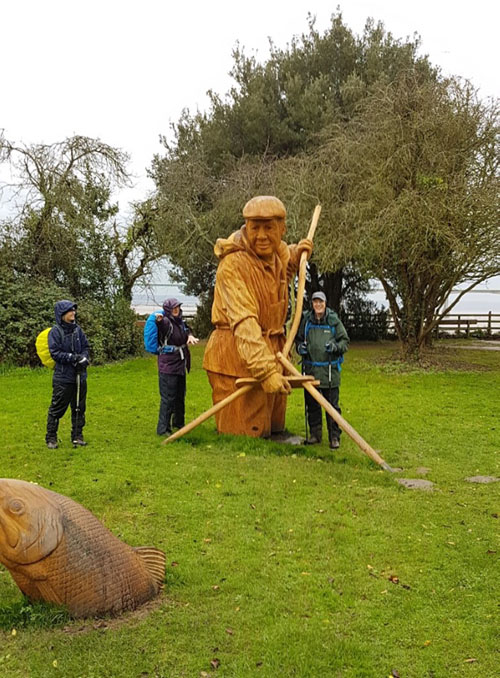 There is a large wooden sculpture of a lave fisherman and a salmon towering over the area. The Estuary has the second highest tidal range in the world. Knowledge passed down over generations allows the lave fishermen to wade out into the estuary to fish for salmon with their lave nets. Fishing can only take place for 1.5 hours either side of low tide. It was first recorded on the Severn estuary in the 1700s, but almost certainly predates this time. The craft was featured in a BBC Countryfile programme about the Gwent Levels earlier this year. We were disappointed that birds seemed to be in short supply, as we could have expected to see migrating birds at this time of year but enjoyed the call of the curlew and a flock of terns.

Sudbrook village was created, between 1883 and 1876, to house the 3000 workers, with their families, who built the Severn Railway tunnel. As well as houses a school, mission hall, two hospitals, a coffee house and reading room were constructed. In 1883 a 6ft tidal wave flooded the village and people had to be rescued from their single storey homes.

During construction, the Severn tunnel was completely flooded by a breach of the Great Spring and the project was saved by a diver, Alexander Lambert, who had to walk through the drowned workings in complete darkness to seal it off. Sudbrook pumping station was built to extract water from the Great Spring; it still pumps millions of gallons of water daily.

Following the estuary, we came upon the ruin of Holy Trinity Chapel and then walked under the 2nd Severn Crossing before travelling inland towards Portskewett. We walked through the Cornfield project which is an open space maintained and enjoyed by the community. An historic map of the village is on a notice board near St Mary the Virgin C12th church.

Driving home the motorway had speed restrictions because of heavy rain and standing water affecting visibility – we were very lucky to have escaped with only one short heavy shower.