Where the Crawdads Sing’ by Delia Owens

Where the Crawdads Sing’ by Delia Owens 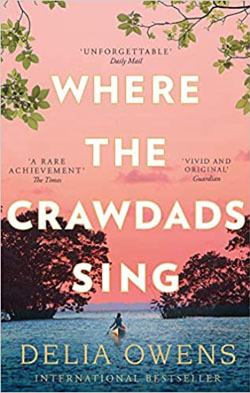 met outside once more, following appropriate social distancing guidelines, to discuss their latest book. The venue this time was Cold Knap in Barry. There were spectacular views across the Channel as we ambled along the promenade in bright sunshine. The book was then mused over by the group as they stopped for a discussion under one of the shelters overlooking the lake.

The book under discussion was ‘Where the Crawdads Sing’ by Delia Owens. It has topped the New York Times Fiction Best Sellers of 2020 for 32 consecutive weeks. The book is set in late 1969 in Barkley Cove, North Carolina and tells the story of Kya, who has survived for many years alone in the marshes, with gulls and sea creatures as her only friends. After a young man is found dead, Kya is a suspect in the ensuing murder hunt.

There was a very positive response to the book from the entire Page Turners group…which seems to occur rarely! Helen loved the elements of whodunnit; Nicola enjoyed the vivid descriptions of the sea and landscape. There were discussions about the role of men in the book, the ending of the book and alternative suspects…(no spoilers!!), the author’s background. Everyone certainly gained something from reading it…and it’s easily a book which could be read again.

It is a book all members of Page Turners would recommend…and scored a 9.5/10.