We started from the Pontypool active living centre. Soon we were walking through Pontypool park to climb up to the shell grotto (groto cregyn) and the Folly tower.

It was uphill to the grotto. As we climbed, we had good views of Pontypool behind us. The grotto itself was closed (coronavirus restrictions) but even from the outside it is an unusual building. It was built in 1794 and many improvements were made by Molly, the wife of Caple Hanbury-Leigh in about 1830. The inside is much bigger than the outside suggests. It is circular and built of rough stone with a conical stone tiled roof. The ceiling is vaulted and supported by 6 pillars decorated with stones and shells. The floor is reputed to be deer bones, but closer inspection reveals a mixture of backbones and teeth from a variety of animals. The grotto fell into disrepair at the end of the last century and was painstakingly repaired in 1996 with funds from Cadw and European aid. 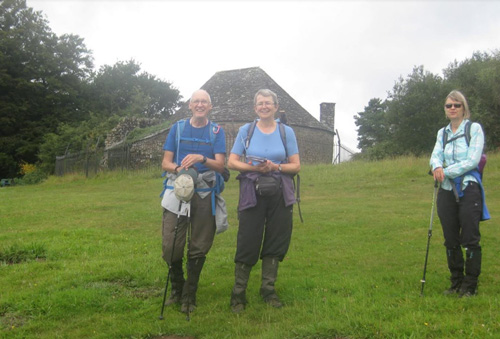 This is arguably the first proper mountain spur in Wales. It is certainly a geographical fault line between the prosperous agricultural lands of Monmouthshire and the radical mineral belt of South Wales.

Continuing north along the Cambrian Way we glimpsed the Bristol Channel glistening in sunlight and the hills around us. Arriving at the Folly tower, we had an early lunch. The 230-year-old tower was rebuilt in 1994 after war time destruction. The views were brilliant in all directions: the channel sparkling in midday sun, Skirrid and Sugar Loaf shaping the horizon and Pontypool nestling in the valley. It had been showery with coats on and off throughout the morning but now the weather settled, though clouds returned briefly as we finished lunch.

The route took us towards Mamilhad via a Roman Road, it was a rough stony track leading downhill through woods and quite slippery after the rain. We were glad to reach the bottom of the road but admired the construction and longevity of the Roman Road.

At the bottom we came across a badge on a stone wall for the Brecon Beacons National Park. Now we turned onto the Brecon and Monmouthshire canal which was built between 1791 and 1812 to transport stone and lime to Newport. After decaying into stagnant disuse, it was reopened in 1970 and today is a vibrant leisure waterway. Navigable from Brecon to Pontypool and walkable for most of the rest of the route to Newport. 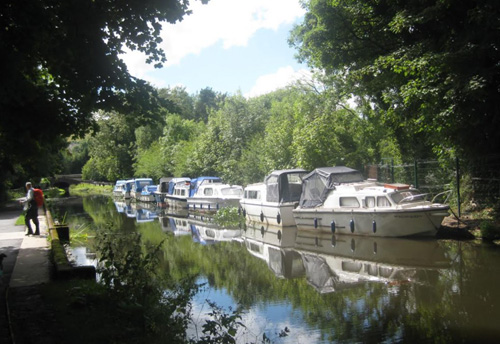 We followed the canal for about 3 miles and were bathed in sunshine the whole time. The Folly tower stood out on the hill above us and we passed the old 1960s British Nylon Spinners works at Mamhilad.

The flat canal enabled us to stride out and we were delighted with the local wildlife. There were lots of fish in the water – one of our group thought they were probably roach. Moorhens and ducks busied about the water and a heron, stood stock-still, in the field on the opposite bank, flying up just after we passed it. A large raptor took to the air along the canal just in front of us, reminding us that we had seen 3 buzzards at the Folly at lunchtime. Then best of all one of our group spotted a kingfisher as it flashed along the canal, the rest of us were sorry we had missed it but then we came to an area where the canal widened and there was a kingfisher perched on a metal railing – brilliant. A local told us that this is the kingfishers favourite fishing spot and he regularly sees two birds. A plant with arrow shaped leaves grew in the water, probably arrowhead. 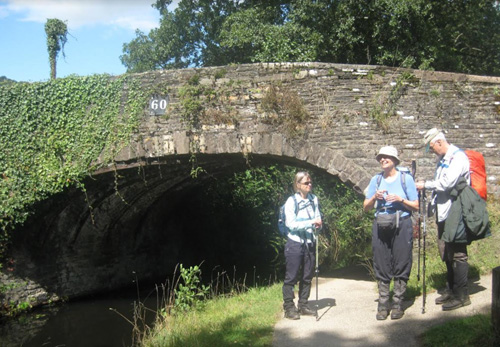 Now we approached Pontymoile Basin, where two canals merge connecting Brecon with the coast in Newport, cause for much celebration in 1812. It was the Merthyr Tydfil ironmaster Richard Crawshay that pushed the project to completion, eager to ensure his iron reached Newport docks more competitively. We left the canal at bridge 52, Pontymoile junction, where there is a picnic area and small café. After a short walk along the main road we re-entered Pontypool park through the ornate Pontymoile gates, the original main entrance to the park. The gates are grade II listed and affectionately called the ‘Sally gates’ – Sally was the Duchess of Marlborough and legend has it that they were a present to the Hanbury family for help with the execution of her late husband’s will. Of particular interest on the pillars are the vines and bunches of grapes which originally, would have been gilded along with the acanthus leaves and finials of the gates. A short stroll took us back to the cars.