It’s 75 years since the ‘Welsh Great Escape’ from the Island Farm prisoner of war camp near Bridgend. On the night of 10 to 11 March 1945, the largest German P.O.W. escape attempt in the UK took place and The Hut 9 Preservation Group are marking the occasion by staging a special open week-end event on Saturday 7th and Sunday 8th of March.

Originally built as a hostel for female workers employed at a local munitions factory, the buildings were later used to house American troops in the lead up to D Day in June 1944. The camp then proved an ideal location for the many German POWs captured by the allies during 1944-5.

The prefabricated concrete huts surrounded by open fields were considered ideal, although the barracks had to be converted and barbed wire fences erected. The camp eventually held more than 2,000 prison-ers. The first POWs were a mixture of Italian and German troops, but the War Office soon decided that the camp was too comfortable for enlisted men and 160 German officers, including generals, admirals and field marshals were held there. Some were among Hitler’s closest advisers. Field Marshal Gerd von Rundstedt for example, had been commander in chief of the German armies in Western Europe in 1940. Reflecting his status, von Rundstedt received certain privileges at the camp, including his own private suite, consisting of a sitting room and bedroom. Rundstedt returned to Bridgend after appearing as a defence witness at the Nuremberg trials. Deemed unfit for prosecution due to poor health, he was released in 1948 and died in 1953 in Hanover.

Gerd von Rundstedt is pictured (left) being given a ‘VIP’-style greeting at Bridgend Station. 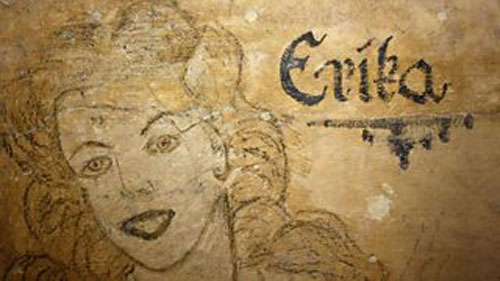 Above – one of many paintings completed by German POWs while at the camp.

Soon after their arrival at Island Farm the POWs began escape efforts and on 10 March 1945, 70 prisoners escaped through a tunnel dug from Hut Nine. The tunnel was about 30 feet (9.1 m) long and breached the perimeter fence. Some of the techniques used by the inmates were ingenious and not too dissimilar to those in the war film ‘The Great Escape’ about Allied POWs. Excavating the tunnels was not easy because of the heavy clay soil. Cans, meat tins, and even knives from the can-teen were used as digging implements. Prisoners carried the soil outside in their pockets while oth-ers kneaded clay into balls and dropped them through a hole in a false wall they had constructed. To support the tunnel roof, oak benches were stolen from the canteen and bed legs were cut down when supplies of wood were depleted. A ventilation pipeline was made from condensed milk tins; air was forced through by a hand-operated fan. The tunnel even had its own electric lights, tapped off the mains supply. Noise was concealed by chorus singing.

The escapees were divided into groups, each of which was equipped with fake identity papers, a map, homemade compass, and food. At around 10pm on March 10, the prisoners made their move; a few stole the local doctor’s car and got as far as Birmingham and another group got as far as Southampton. However it seems that all the escapees were eventually recaptured,