Whilst much of the news about wildlife is often negative and depressing, one interesting item that is bucking the trend is the Knepp Estate and anyone with a genuine interest in UK wildlife needs to be aware of it. This is a 3,500 acre estate near Horsham in West Sussex which was not 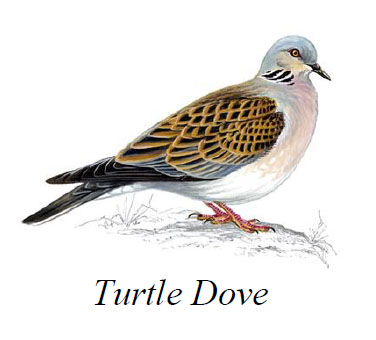 making a profit and where from 2001 this intensively-farmed land was ‘rewilded’ by being grazed by Longhorn cattle, Exmoor ponies, Tamworth pigs and red, fallow and roe deer. These animals prevent the scrub land that emerges from becoming woodland, require little or no supplementary feeding, minimal veterinary costs and generally look after themselves throughout the year. There is a lot more to the process than we can do justice to in this short article but if you want to know more, either read the book Wilding by Isabella Tree or look at the website https://knepp.co.uk/ home. You can also visit the site and go on walks or safaris around the estate.

The results in terms of wildlife alone are dramatic. 90% of the UK nightingale population has been lost since 1970. In 1999 there were 9 nightingale territories in Knepp which had risen to 43 by 2013. Since the 1960s Turtle Doves have declined by 96% and the bird is predicted by the British Trust for Ornithology to be the likeliest to be extinct in the UK by 2020. There were 3 singing males at Knepp in 1999 which by 2017 had increased to 16. Our second biggest butterfly, the rare Purple Emperor, was not recorded at Knepp before 1999 yet is now well-established there with an increasing population. 13 of the UK’s 17 species of bat can be found on the estate including two of the rarest in Europe. All five of Britain’s owls have now been recorded there along with 600 species of invertebrates. Doing particularly well are those that feed on dung as this is uncontaminated by parasiticides which may be used in conventional farming. The rare Scarce Chaser dragonfly, which has been found at only 6 sites in the UK, has now turned up at Knepp with 18 individuals counted on a single day. Raptors include Buzzards, breeding Red Kites, Ravens (which had been absent for 100 years) and Peregrine Falcons are now also here.

Whilst there were many hurdles to overcome, interestingly some of the greatest opposition came from local residents who preferred to see fields that were all green with neatly-manicured hedgerows,

however devoid of wildlife they might have been. Comments like ‘It feels like a foreign land’ and ‘he has turned a fine working estate into a wasteland – someone needs to stop him’ are not uncommon. The most obvious point that the intensively-farmed estate was just running at a substantial loss was not acknowledged.

Those behind the project would not argue that profitable and productive farmland should follow this route but for land which is losing money it is an option worth considering. Recent announcements in Wales refer to the Summit to the Sea project which will involve up to 10,000 hectares of land in mid Wales being rewilded. Whatever the future holds we can be sure that we shall hear and see more of rewilding in the months and years to come.