THE MIRACLE OF THE CHRISTMAS TRUCE 1914 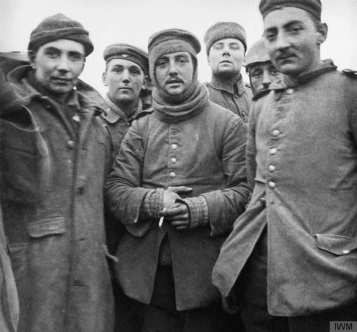 This photograph shows German and British soldiers standing together on the battlefield near Ploegsteert, Belgium, during the Christmas Truce. On the far right a football match between Allied and German soldiers was supposed to have taken place during the Christmas Truce. How much truth is there in all this?
On a frosty, starlit Christmas Eve in 1914 a miracle took place on the Western Front. Peeking over their trenches for what must have been the first time in weeks, British soldiers were surprised to see Christmas trees lit with candles on the parapets of the enemy’s trenches. A melody drifted over the darkness of ‘No Man’s Land.’ Men of the British Expeditionary Force heard German troops in the trenches opposite them singing carols and patriotic songs and saw lanterns and small fir trees along their trenches. Carols and messages began to be exchanged between the trenches. First “Silent Night,” then “God Save the King.” This was followed by the cry of “You no shoot, we no shoot!” The Christmas Truce was a brief, spontaneous cease-fire that spread up and down the Western Front in the first year of World War I. The incident has become a symbol of peace and goodwill.
Letters home reported the wonder of the Christmas Truce. Corporal Leon Harris, 13th Battalion, London Regiment wrote, “This has been the most wonderful Christmas ever. We were in the trenches on Christmas Eve and about 8.30 p.m. the firing was almost at a standstill. Then the Germans started shouting across to us, “Happy Christmas”.
In his letter home, Rifleman C.H. Brazier commented on soldiers leaving their trenches and entering ‘No-Man’s Land.’ “Half-way (across) they were met by four Germans. They gave our fellows cigars and a bottle of wine and were given a cake and cigarettes. When they came back I went out with some more of our fellows and we were met by about 30 Germans, who seemed to be very nice fellows. I got one of them to write his name and address on a postcard as a souvenir. All through the night we sang carols to them and they sang to us.”
British and German soldiers met and exchanged gifts, took photographs and some played impromptu games of football. One British Officer even claimed his regiment actually had a football match with the Germans who beat them 3-2. The incident was famously remembered by Edmund Blackadder in the funny and poignant final episode of Blackadder Goes Forth. “I was never offside! I could not believe that decision!”
Most historians think it was unlikely that there was actually a football match between the Allies and Germans and emphasise other features of the Truce. Both sides took the opportunity to bury casualties and repair trenches and dugouts. After Boxing Day, meetings dwindled. In any case, the Christmas Truce was not observed everywhere along the Western Front. Some fighting continued and casualties did occur on Christmas Day. Some officers were unhappy at the Truce and worried that it would undermine fighting spirit. After 1914, the High Commands on both sides tried to prevent any truces on a similar scale happening again. Despite this, there were some isolated incidents of soldiers

(this article is incomplete)