Spotted in early October on some ivy growing near the Village Shop was this bee, the Ivy Bee – our first record in the parish although it has probably been around for a while. Amazingly this bee was new to Science in 1993 and first recorded in Britain in 2001 in Dorset since when it has spread out steadily. New species are always of interest although some, unlike this one, bring their own problems such as the Harlequin Ladybird. 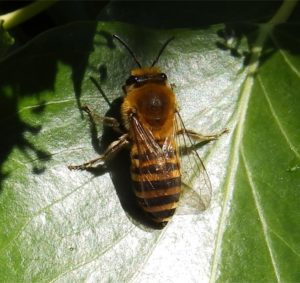 Whatever Brexit may bring or not bring the news on the wildlife front overall is not good. England (we have no comparable figures for Wales but it is improbable that they are any better) has the largest membership of wildlife-protection organisations in Europe but has amongst the smallest amount of land protected as nature reserves. France has 2,750,000 hectares protected; England has 94,400. Even Estonia manages 258,000. America has its National Parks where wilderness is sacrosanct – in all of our National Parks large areas are intensively grazed by sheep or in England and Scotland, managed as grouse moors. In an earlier issue of What’s On we noted how far behind their own targets for tree planting Wales and England were.

For whatever reasons, wildlife is very low on the political agenda at the practical level. Look at the minutes of Council meetings or coverage in the Gem to see how often wildlife features. Twenty years ago the Cuckoo could be heard in Wenvoe every Spring. It is now extinct in the parish. This may all seem quite dispiriting but there are things that we can all do. For instance, planting wildflowers helps pollinators. If you cut a tree down, replace it with another – still better, plant more. Make sure your garden is hedgehog-friendly with spaces for them to travel around – an adult hedgehog may roam 2 kilometres each night. There are many other small practical things that can be done but also consider letting your elected representatives know your views on these topics so that conservation is prioritised and some funding allocated. To end on a more positive note a future issue of What’s On will cover what is emerging as a real success story – the Knepp Estate.