From Renoir’s Blue Lady to global surveillance and drone warfare: the National Museum has it all.

The National Museum in Cardiff is well known for housing one of Europe's finest art collections, covering a period of 500 years and including one of Europe's best collections of Impressionist art. When the Rolling Stones played the Millennium Stadium recently, Mick Jagger announced to the crowd that he and Keith Richard had hired bikes for a trip to the museum to see Renoir’s Blue Lady. The pair apparently followed this with a pint of Brains and a trip to Caroline Street for curry and chips. 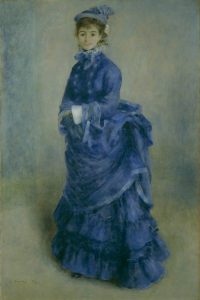 Artes Mundi was founded in 2002 by Welsh artist William Wilkins. The winner of the Artes Mundi Prize will take home £40,000; the largest art prize in the UK and one of the most significant in the world. The Independent newspaper has called it the best art prize in Great Britain, ‘totally eclipsing and outclassing the Turner Prize.’ BBC news went even further calling it ‘One of the leading contemporary art prizes in the world.’

The event has become increasingly popular. Previous exhibitions, based mainly at the National Museum and occasionally using smaller venues such as Chapter Arts Centre, have attracted well over 100,000 visitors. In contrast to the Turner Prize, which requires its nominees to be either born or working in Britain, artists from anywhere in the world can be nominated.

Artes Mundi is Latin for ‘arts of the world’ and as such, selected artists are united by an interest in global issues. The work exhibited is often political and can be controversial.

So what can we expect to see this year? A short-list of five internationally acclaimed artists, was selected from over 450 nominations spanning 86 countries.

Bouchra Khalili is Moroccan-French. Her video work, which focuses on political minorities, was exhibited at the Museum of Modern Art in New York in 2016.

Anna Boghiguian is an Armenian. She is a nomadic artist, constantly moving between different cities across the globe. Her work, which has been described as both funny and frightening, investigates subjects such as war and revolution.

Otobong Nkanga is a Nigerian artist. Her work explores changes in the environment and is part of a permanent collection at the Tate Modern.

Trevor Paglen is an American who launched an artwork into orbit 2012. Paglan’s ongoing project investigates global state surveillance and the ethics of drone warfare.

Apichatpong Weerasethakul is a Thai artist whose video and feature films have won widespread recognition, including two prizes from the Cannes Film Festival. His films cover themes such as dreams, nature and Western perceptions of Asia.

Find out more at www.artesmundi.org