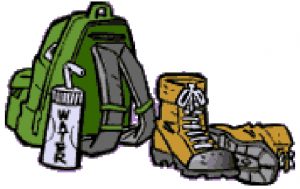 We parked at Tintern Abbey and started by walking across the bridge at Abbey Mill over a full river Wye. The Abbey Mill’s old water wheel was made around 1870 and ran until 1951 when 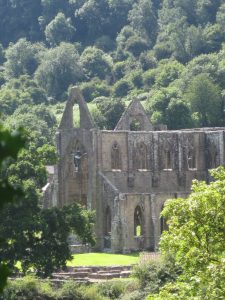 electricity replaced water power. The mill paid an important role in the industrial history of Tintern. Originally a corn mill to Tintern Abbey, it later became an iron wire works and finally a wood turnery and sawmill. The Abbey mill still stands after 870 years of change and the Wheel, lovingly restored in 2009, turns again.

Good paths took us on a steady climb up to Brockweir in brilliant sunshine. Still climbing we crossed a field towards Madgett Hill which we shared with a herd of cows and as we got higher realised there was also a herd of goats, and sheep in the field to our right.

At the top we arrived at a campsite on Beeches farm – barbeques were distributed around the site as well as a central washing area and small shop. We chatted to the farmer who pointed to his gateposts; a dragon for Wales on one side and lion for England on the other, the campsite is on the border of the 2 countries and Offa’s dyke. We avoided the Offa’s Dyke path from here, missing the Devil’s pulpit, as we knew it would be busy on such a lovely day. Instead we walked along the access road for the farm which was straight for an amazing distance – several kilometres to Tidenham . This is Miss Grace’s Lane, presumably originally built to reach Miss Grace’s home. Interestingly there is a 4 Km caving system between Brockweir and Tidenham named after the road, which took a number of years to locate as it is very deep. This is the largest cave in Wales. 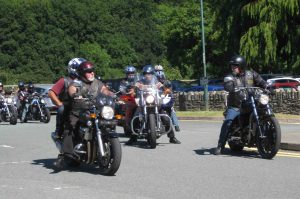 At the main road, we turned right onto another road which led to a path through tunnels of trees offering shade from the intense heat of the sun which was much appreciated. The edges of the path were covered in a profusion of wild flowers and buddleias as well as some magnificent grasses. The sides of a quarry towered above us near the end of the path.Now we headed back towards Tintern along an old railway (of which no signs remain) and the banks of the Wye providing easy walking, again in the shade of trees. A surprisingly large rock sat in the middle of the path at one point. All of a sudden we had a superb view of Tintern Abbey through a gap in the trees. On arrival at Tintern we had walked 7.5miles and climbed 800ft. There was a large group of bikers, who had stopped for an ice-cream. We headed to the pub for a welcome drink, sitting near a lavender hedge, humming with the sound of bees (honey, white bottomed and orange bottomed). The bikers roared off, as we sat and relaxed.