Vaccines To The Rescue …..Once Again!

VACCINES TO THE RESCUE …..ONCE AGAIN!

On 13 January 1962 Shuka Mia arrived in Cardiff on a train from Birmingham. He’d flown into Britain the day before on a plane from Pakistan, where a smallpox epidemic had claimed hundreds of lives that winter. On arrival in the city centre, the traveller – and the virus – made their way through the centre of Cardiff to the place where he’d arranged to stay. Though he carried a vaccination certificate, he brought the deadly virus to Wales. The disease he was carrying was one of the most horrific known to man. Although it has now been eradicated, in 1962 it was still rife in many parts of the world. A day after he arrived at the Calcutta Restaurant in Bridge Street, a GP was called to see Shuka Mia who was in bed upstairs. The doctor suspected smallpox. The patient was taken to the Lansdowne isolation hospital, where specialist Dr John Pathy saw him the next morning and confirmed the diagnosis. As the news broke that smallpox was in the city, a desperate search began for anyone who may have been in contact with the carrier. 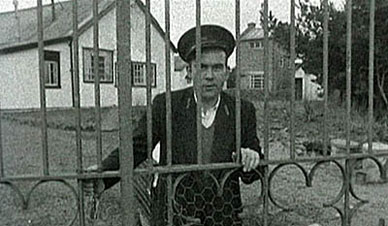 Shuka Mia was sent to the top of a mountain above the Rhondda where he was shut away from the outside world. All that remains of the Penrhys smallpox hospital on its windswept hilltop are the high walls which surrounded it. But during the crisis of 1962, 12 patients were isolated there as doctors fought to control the outbreak.

The reaction of the authorities was strikingly familiar to that today. In Cardiff a huge operation was mounted to trace contacts and to vaccinate anyone who might have been in contact with Shuka Mia – either in the city or on the train that brought him to Wales. But thousands of people demanded vaccination and sometimes tempers flared. Over the next few weeks, 900,000 people in Wales were vaccinated against smallpox. Extra supplies of vaccine were brought in from as far away as Argentina.

The quick and decisive action of the authorities seemed to work. No one in Cardiff or the Vale became ill and for more than a month it seemed the smallpox scare was over. Then, out of the blue, a consultant at East Glamorgan Hospital Dr Robert Hodkinson became seriously ill. He was the only doctor in the hospital who decided not to get vaccinated and he died. It turned out he contracted small pox through a woman in the Rhondda he had treated, who died in childbirth. Other members of her family were also fatally affected. It was and still is a mystery how a heavily pregnant woman in Maerdy in Ferndale, way up in the Rhondda, got it from Cardiff. Six people died in the Rhondda and smallpox was about to be declared as over when days later 12 more people were inexplicably found to have contracted small pox and died in Glanrhyd hospital in Bridgend.

There is of course a strong link to this story and the development of Covid 19 vaccines today. The technique of variolation or deliberately infecting a patient with a mild dose of smallpox in the expectation that it would provide protection from a more severe infection had been used in China, India and Turkey long before Edward Jenner started his clinical trials in 1796. Jenner’s though was the first successful scientific attempt to control an infectious disease (small pox) by the deliberate use of vaccination. Jenner is rightly praised for his pioneering science. He also deserves recognition for his advancement of the idea that vaccination should be free at the point of delivery and available to everyone. Jenner considered himself the ‘Vaccine Clerk to the World’ arguing that ‘the Sciences are never at war.’ He realised that the eradication of small pox would, as in the case of Covid 19, require a global response. Finally, what of Shuka Mia? Well possibly as a result of already having been vaccinated, he survived small pox and returned home to his family.