A Deadly Game Of Catch

A Deadly Game Of Catch

It was about three o’clock on a chilly morning and I was sitting in some bushes at the corner of a paddy field looking across into China from the Hong Kong side. The border was defined by a tall metal fence with razor wire at the top and apart from identifying the frontier, this impressive barrier was designed to prevent people from China making their way illegally into Hong Kong.

The year was 1980 and I was there with soldiers of The Royal Regiment of Wales to stop a large number of illegal immigrants crossing into the British colony of Hong Kong which had been under British control since 1842. The Chinese who wanted to come across were all poor with no work or very low wages under the communist regime and they saw a better life in capitalist and free Hong Kong. They knew that if they reached “home base” they would be eligible for free housing, medical care, schooling and financial support until they found a job. It was very enticing and huge numbers made an attempt, and although many were caught a good number succeeded. The television channels of Hong Kong could be seen across the border in China and to a poor Chinese farmer the apparently fabulous and flashy lifestyle of the Chinese in Hong Kong who all had cars, air conditioning and freedom was all very seductive.

The border runs for twenty miles across mainly flat land which is a mixture of farms and open countryside. Originally built in 1952 to stop gun smuggling during the time of the Korean War it was reinforced by the erection of a much stronger fence or wall in 1962 as thousands of Chinese were trying to cross into Hong Kong each day. By the time we were sent there the fence was tall and effective and with a single lane tarmac road running beside it which allowed us to drive quickly along from one end of our sector to the other. While President Trump is criticised for building a fence to keep out illegal immigrants crossing from Mexico, the British had built their fence decades before to keep the Chinese out. 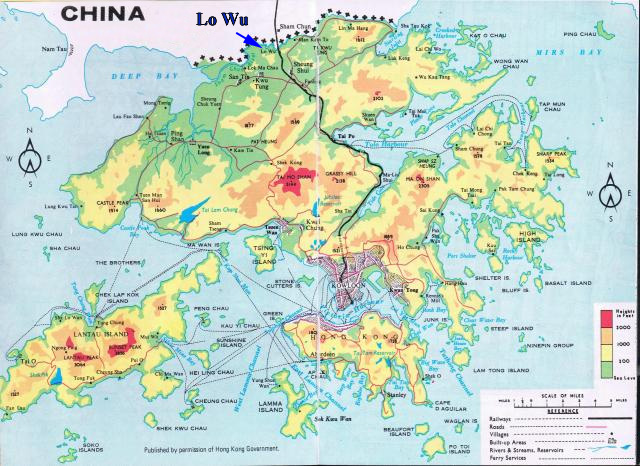 We were based in an old, very old, army camp near the town of Lo Wu which was a short drive from the border fence. Each evening at around dusk lorries and Land Rovers would take out soldiers wearing their camouflage clothing and with running shoes rather than heavy boots. They would be dropped off in groups of four at intervals along the fence. With a large flask of coffee, they would wait throughout the hours of darkness to catch any illegal immigrants that they found climbing over the fence. The one thing that gave us a big advantage over the illegals was that the soldiers were issued with night viewing devices, called at that time “starlight scopes”. These basically allowed us to see in the dark and so we could pick out any individuals approaching the fence before they started to climb over. This enabled us to move stealthily into a position where we could catch them once they landed on our side. If it had been a game, it would have been unfair, but this was no cat and mouse game this was deadly serious.

The illegals would usually arrive in ones and twos but sometimes a whole family group with children would arrive and attempt to climb over. They had very few possessions. Some had a magic ointment Tiger Balm, to soothe their aches and pains, others had family photographs and a number were carrying drugs such as hashish to ease their discomfort. When caught they would be handcuffed and taken by vehicle to the nearest police station and handed over to the Hong Kong police. The following day they would be put on a train and sent back to China. While we imagined that they would be interrogated and punished by the communist regime for their escape efforts this was not the case as we sometimes caught the same people coming over the fence a few days later. On an average night, we caught between five and twenty illegals in my sector alone and that was just a 4 four mile stretch of the border. The majority gave up quietly. They were mostly very tired and malnourished, but a few ran for it though we soon caught them. These were Welsh soldiers and rugby tackles were learnt in their youth.

One distressing incident, which has remained with me, was of a family of five who attempted to cross the fence. The father went first with the eldest child, a teenage daughter, while the mother waited on the Chinese side until they were safely over. But the father and daughter were quickly caught and taken away leaving the remainder of the family on the far side. We never knew what happened to them, but it was very sad to see a family split like that.

In 1997 Hong Kong was transferred to China after 156 years of British rule. The border remained a controlled area but as Hong Kong became part of China there was no longer any incentive for people to cross illegally and the border became the responsibility of the civil police.