We were having an enjoyable morning skiing in Eastern Turkey. We were training to climb Mount Ararat on skis, and we needed to hone our skills and improve our fitness in the mountains. Earlier that morning, we had enjoyed a good breakfast in our hotel in Erzurum, a historic city on the Anatolian spice route. It was a short ride to the ski resort of Palandoken and on arrival our minibus parked at the end of the road just where the snow began to cover it.

We took our skis and rucksacks and strode over to the snow and clipped into our touring skis. We were using artificial skins which stick to the base of the ski which allows you to walk uphill on snow. Once everyone was ready, we split into three groups of five or six people and set off making tracks up the nearest hill. It was warm work in the sunshine, and I undid my jacket to increase the ventilation. It was early March and spring was in the air.

As we ascended a wide snow slope our small group were close together skiing in the tracks of the leader. To our surprise, we saw a chimney sticking up out of the snow and smoke was belching out of it. Some yards below the chimney we saw a small opening, the size of a little door, with a blanket covering it. At the sound of our voices, a child of about six appeared and she was as surprised to see us as we were to see her. Soon her mother came out and greeted us, but it did not take long to realise that there was a serious language barrier. That did not deter her, and she keenly beckoned us into her home. We kicked off our skis and one or two at a time we crouched down to enter. The main space was carpeted and of a good size with chairs and a table. A cooking area was at the rear with a hot stove that was the source of the smoking chimney. We declined the kind offer of a cup of tea and, giving sweets to the daughter, we resumed our travel upwards.

At the crest of the hill, we looked down to the road below and the small parking area where our buses were waiting for us. We removed our skis and took off the skins in readiness for a quick ski back to the road-head and the appealing prospect of some lunch. The other two groups were close to us but set off first, and we followed them down. It was steep but not steep enough to be challenging. Our group were all skiing down taking their own routes but staying fairly close together. Richard and Robert were slightly below and to the right, but I had stopped with our guides, David and Alisdair, as we looked for the best route to take for the last few turns of our descent. 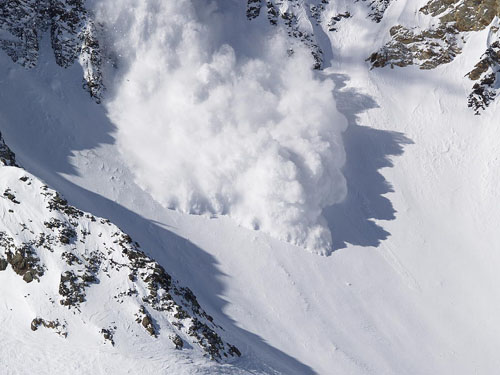 Then I heard the dreaded word AVALANCHE shouted out by David. I turned around and looked uphill to see the whole hillside moving down above us. Quick as a flash David had reached down and taken off his skis – the best thing to do if caught in an avalanche. I had a fleeting go at unclipping my bindings, but they did not release so I tried to ski sideways and out of the moving snow. We were now on a moving carpet of snow and Alisdair was below me and slightly to my right. In seconds I had been knocked over by the wall of snow and was now falling, cartwheeling downhill. A feeling of dread overcame me as my movement stopped. I could see nothing and the weight of a ton of snow constricted my chest. Breathing was very difficult. Then to my surprise, the snow tomb moved again, and I felt I was going over a small cliff and falling – then it finally stopped. I could not move a muscle; my hands were outstretched in the swimming position and my sunglasses were stuck in my mouth. The water bladder in my rucksack was emptying its contents down my neck as the valve had come off. I could barely breathe. All was very still and quiet. I made a determined effort to breathe slowly and shallowly, to stay calm and to stay alive. Suffocation is the first killer.

After what seemed like ten minutes, I heard a voice; Richard and Robert were looking for me with their electronic avalanche trackers and soon they were digging above me with their snow shovels. I yelled to encourage them and quickly they dug down to me and cleared an airway to my mouth. But once they found I was alive and breathing they went off to look for Alistair who was also buried.

They soon found him nearby, but he was buried deeper. With the help of soldiers from the nearby army post, they dug him out and tried to resuscitate him, but it turned out that he had died instantly of traumatic asphyxiation. It took ages to dig me out, but I was on my feet as they carried Alasdair down to the road.

After giving a statement to a kindly young police officer I was given a lift back to our hotel and the room I had been sharing with Alastair. His folded silk pyjamas were poignantly laid on his pillow. As I sat on my bed gathering myself together Sally appeared at the door with a bottle of schnapps. She said, “I think you need some of this!” and asked if she could be of help. I asked her to pack Alisdair’s stuff up in a bag and took a long grateful swig of the cold Swiss schnapps.