Blorenge – We began at Keepers Pond (officially Pen-ffordd-goch Pond) in the south-eastern corner of the Black Mountains which is nestled in the hills of the area. Keepers was the final of three reservoirs built to supply water for the forges and works of Garn Ddyrys foundry. The car park was busy with cars also parked across the road. We were surprised to find a good number of people in wet suits who had just finished a swim in the pool. Although it was a sunny morning the water did not look very inviting to us! A group of men had remote controlled motorboats on the water which were making a whining sound and spoiling the peaceful atmosphere of the place.

Setting off we walked along the edge of the pond towards the aerials in the distance at the Foxhunter carpark, our aim to walk anticlockwise around the mountain.

This area is a world heritage site, an SSSI and part of the Brecon Beacons National Park. It was once prized for the raw materials it provided for industrial processes. Limestone was quarried and coal mined with Blaenavon Ironworks to the southwest.

But the landscape is now treasured and protected for wildlife. The limestone cliffs are home to a rare species of whitebeam tree and nesting birds. The coal measures are covered in heather, the moorland providing habitat for many birds and shallow pools left by old coal workings are rich in dragonflies.

Arriving at the aerials we found the grave of Foxhunter, a Champion International Show Jumper. Best known as part of the 1952 summer Olympics team which won Britain’s only Gold medal at Helsinki. They also won bronze in the 1948 Olympics and amongst many other wins the King George cup in 1948, 1950 and 1953. Foxhunter’s skeleton was preserved and donated to the Royal Veterinary College where it was put on permanent display. His hide was buried on the Blorenge and when his rider Sir Harry Llewellyn died aged 88 years in 1999 his ashes were scattered around the horse’s memorial. He had 2 sons Dai and Roddy, both of whom became well known media personalities, the latter because of an 8 -year affair with Princess Margaret.

We followed a path leading northwest towards the trig point marking the top of the Blorenge mountain (559m), spotting cotton grass in the moorland. To the side of the trig point is a much older stone cairn which marks a Bronze age burial site. Visibility was excellent and we could even see the Bristol Channel in the distance. The whole of Abergavenny could be seen in the Usk valley with the Skirrid and Sugar loaf providing a backdrop whilst England stretched flat into the distance. The Welsh hills, to the west, were also clear – a wind turbine and semi-circular upper part of a white bridge glowing in the sunshine. 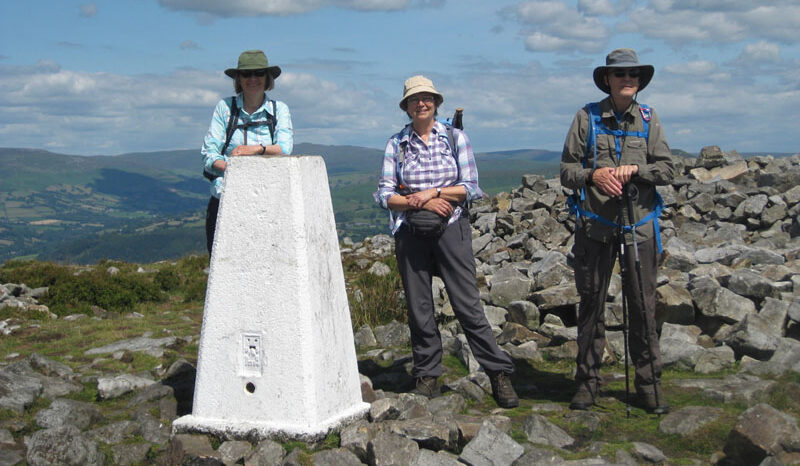 We descended slightly towards Abergavenny and walked along the edge of the escarpment keeping our height and contouring around the mountain. A post at one point marked the Iron Mountain Trail. This is a route of 12 miles which can be split into 2 walks. It follows the routes of former tramways, inclines and footpaths linking many of the historic features which make up the landscape of the World Heritage Site between Blaenavon and Abergavenny,

It was a glorious summer day and we lingered a while over lunch which was spent looking across the valley to Abergavenny. We tried to identify the distant hills before a local passer-by confirmed they were the Malverns. A few hang-gliders who looked as though they were almost landing before soaring back up into the sky and finally landing in a field entertained us. Although the traffic in the valley was light it was amazing how much noise from it rose to us.

Walking on we found wild thyme growing on the stony ground and spotted a few fritillary butterflies. The heather was in full flower. As we approached the northernmost point of our day, we could see the distinctive outline of Pen y Fan and its neighbours on the skyline. Arriving back at Keepers Pond white fluffy clouds were gathering and the temperature dropping. We met swimmers tip toeing their way out of the water while begging a friend to throw them a towel.