COUNCIL URGES US TO TREAT OUR MASKS LIKE OUR UNDIES

A year ago we couldn’t possibly have imagined that while going about our normal business the wearing of masks would be a common sight. Of course we are used to seeing masks in all sorts of contexts and we seem fairly relaxed about being told to wear them.

Masks have a long and often strange history, particularly in popular culture. In Ancient Greece masks worn by actors had brass megaphones to amplify what actors were saying. When an Indonesian Topang dancer dies, his used masks are never moved from where they were at the time of his death. In the 17th century people believed the plague could be carried by poisoned air or miasma. Plague doctors covered themselves head to toe and wore a mask shaped like a bird’s beak. Perfumes and spices held under the masks were said to neutralise the miasma.

It was not until the late 19th century that masks were being worn in operating theatres. This process was accelerated by their use to protect medical workers during the Manchurian plague of 1910–11 and the influenza pandemic of 1918–19. During the latter the safety measures taken were very similar to those today. The United States for example, closed churches, soda fountains, theatres, movie houses, department stores and barber shops. The amount of space allocated to people in public spaces was regulated. There were however fines against coughing, sneezing, spitting, kissing and even talking outdoors. Some Americans went to prison for refusing to wear masks or not paying fines and a health inspector shot a blacksmith for refusing an order to wear one. All this led to masks becoming unpopular and an Anti-Mask League being formed in San Francisco.

Back in the UK, smog in our industrial cities was a further example of something which led to mask wearing for public health reasons, until The Clean Air Act (1956) began to improve matters. 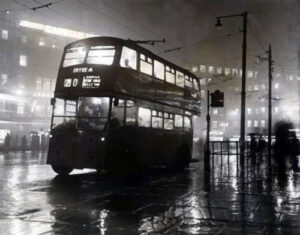 This picture of a Manchester bus during the smog was taken at midday! 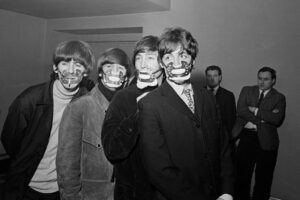 As late as 1965, the Beatles wore masks to counter the effects of smog on their way to a concert in the city.

While wearing face coverings is not ideal, it has not taken long for the demand for fashionable masks to accelerate. Hello magazine recently ran a whole feature on where to buy a stylish or fun version. You can get one of your favourite band or football team. Maybe you want to make a political point.

To help get the message across, Sunderland Council has issued the following advice. “Treat your mask like your undies. Dinnit touch or rive at it, especially in public. Dinnit borrow one from ya marra (mate) or lend yours to them. Mack sure it’s canny tight but comfy. Mack sure it’s the reet way round. If it’s stained or hacky, hoy it in the bin. If it’s damp or foisty, change it! Dinnit go commando!”