A Day To Remember On Skis

A DAY TO REMEMBER ON SKIS

It was a Saturday morning in the early spring and I had woken up in Chamonix, the historic town in the heart of the French alps under the shadow of the mighty Mont Blanc. We were having a rest day and planned to do one of the longest ski descents in Europe, a 20 km run called the Vallee Blanche. But first breakfast was calling and off we went to the restaurant for our baguette, croissants and coffee. Candidly we never felt that the French quite hit the mark with their breakfasts, but they were just about worth get-ting out of bed for. 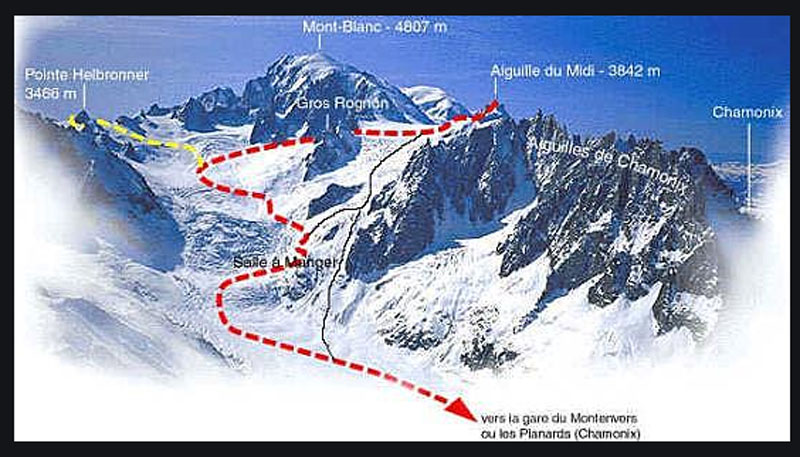 It was rather inconvenient that the main cable car we needed to use to reach the Aiguille du Midi, our starting point, was closed for repairs so we decided to drive our minibus through the Mont Blanc tunnel into Italy and to take the cable car up from that side. Hearing our conversation over breakfast a French mountain guide asked if he could join us, as he too had the day off and would like to ski the Vallee Blanche with us. So we welcomed Yves to the party and set off for Italy. We caught the first possible cable car to reach Pointe Helbronner from where we could put on our skis and ski down to join our original route back to Chamonix.

Sadly the weather at the top station was awful, a full white out which is a condition when the sky and snow appear as a white sheet in front of you which makes skiing and navigation really tricky. So we drank the inevitable coffees until it cleared. When it did we shot out of the door to make up for lost time and readied ourselves for this challenging ski descent down a glacier. As we lined up, Yves asked if he might lead us down and we thought that was a good idea as, being a Chamonix guide, he would know the safest route. So he went first, followed by John our guide who carried a rope, and I skied at the back of the group with a spare rope. We all started off in high spirits.

It was good to be skiing at last. Yves called back that we should follow his tracks as he picked his way be-tween the visible crevasses of the Geant glacier. After a few minutes, Yves and John stopped and we all pulled up, keeping a safe distance between each other. Yves had decided to rope up with John so that if he fell down an unseen crevasse John would be able to arrest his fall with the rope. Being guides they were quick and professional and in a few minutes, someone shouted that Yves had gone. I replied that was fine and we would follow on shortly. “No – he has really gone!” came the reply. In fact, as soon as he had skied off he had fallen straight down a deep crevasse. John had 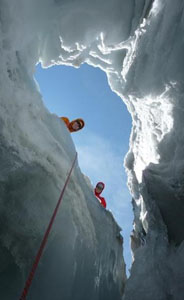 done a textbook arrest by simply dropping down with his skis at a right angle to the pull of the rope, which otherwise might have dragged him in on top of Yves. I told everyone to stay still and went forward with my spare rope ready to carry out a much-practised crevasse rescue of Yves. First I had to establish a belay or anchor, so I took off my skis and thrust the first one deep into the snow – to my horror the snow, about the size of a table, fell away at my feet and I was staring into a deep ice-cold blue crevasse and I was about to fall into it. Quickly I put my skis back on to spread my weight and I moved towards John. A crevasse fall is very serious. It can result in a head injury or broken bones which make extraction more difficult. In the worst case the victim becomes wedged at the bottom, where the sides narrow, and body heat melts the ice which soon refreezes and locks the body to the ice. In this case we knew from his shouts that Yves was uninjured and together we set up a pulley system and hauled Yves out, not without a few Gallic expletives on his part. Alas, he had lost a ski down the crevasse but was otherwise fine; only his pride was hurt. We were lucky to get away so lightly from this potentially dangerous incident.

Shocked as he was he insisted on leading again, now skiing with great skill and balance on a single ski. Amazingly he soon disappeared over the lip of an-other crevasse, but this time John had him on a tight-rope and he did not go far down. Again we pulled him out but we had a long descent to make which on his one ski would have been very difficult. So we made our way to the Requin hut at the side of the glacier where the kindly guardian gave us coffee and found a spare ski for Yves to use. Our adrenalin reserves were running low – it was good to take a breath.

We were now past the Geant icefall and the crevasse risk was behind us, so we skied down happily as far as we could to a point where the snow runs out. Here we took off our boots and put on the trainers we had packed in our rucksacks for the hike up a steep path, to join a modern metal staircase which had been built to give summer visitors easy access to the glacier. At the top of the steps was the small train station of Montenvers. This was the end of the line for a narrow-gauge railway, using a rack and pinion system, which was built in 1908 for the Victorian tourists. How we wished the service was running that day, but sadly it was not so we set off for the long walk back to Chamonix. Our various diversions had set us back so the sun was setting as we reached the town where we quenched our thirsts with good French beers at the Bar National. It really had been a day to remember. 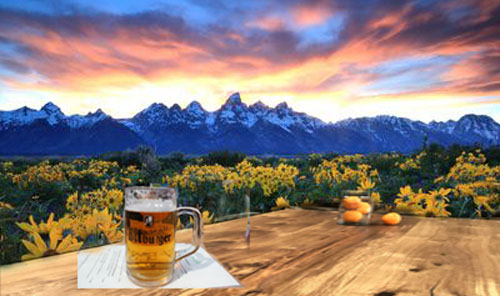