On the landing in Gran’s little house was a large oak chest of drawers on which rested the treasured family Bible. In those days just about every home had one and I remember being fascinated by the contents – the faithfully recorded entries in fading ink, the sepia photographs of long-dead relatives, clothed on their Sunday best clothes, glaring ferociously at the camera, the papery pressed flowers from long ago all of which gave me some idea of life in those times. What happened to these treasures I will never know.

The drawers of the chest were largely taken over by household linen, delicately perfumed with dried lavender from Gran’s garden, but one drawer was devoted to what she called her ‘special things’ which she treasured above all else. There were gloves and a handbag in the softest leather with an amber clasp, a set of beautifully illustrated postcards entitled “The Volunteer Organist” from the 1914-1918 War and lastly two long necklaces, one of jet beads and the other of amber, only worn on Sundays to go to chapel. As a child I was allowed to play with these things, if I behaved myself. 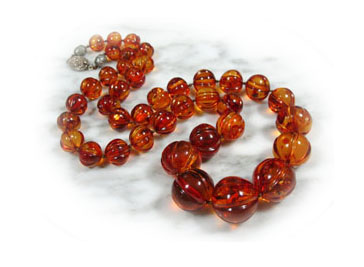 Imagine my surprise recently when I chanced on the TV show, ‘Flog It’, as far as I could tell, an identical necklace of amber beads went under the hammer for £830.00, to the astonishment of the vendors who had put a reserve of only £200.00 on it.

Sadly all Gran’s treasures are lost in the mists of time, but when I next have a good sort- out , I shall pay more attention to what I’m discarding which my family might appreciate.‘

Point of interest.— ‘Forever Amber’ is the title of an historical novel by American author, Kathleen Windsor and was first published in 1944.