This month, the Page Turners were asked to suggest which of their favourite authors they would invite to a post-lockdown dinner party and why.

May issued her invitation to Jane Austen, author of ‘Pride and Prejudice’ and ‘Emma’, amongst many others. May would ask her if she wrote romances based on her personal feelings, or because they were popular and provided her with an income.

Sylvia’s choice of guests would be Annie Proux, the Pulitzer prize winning author of ‘The Shipping News’ and ‘Brokeback Mountain’. Her latest novel is ‘Barkskin’s’, whose theme is deforestation. Sylvia’s dinner party discussions would centre on the meticulous research undertaken for her books.

Lynne would like Michelle Obama who wrote ‘Becoming’ at her table. Michelle (presumably I would be on first name terms if she was in my house!!) was the first African American First Lady of the USA and has inspired a generation of women. Conversations with her on education, poverty, politics and empowering women would be very interesting.

Helen’s guest would be Sir Thomas More, the 16th century humanist, martyr and statesman who wrote several books, including ‘Utopia’ and ‘Richard III’. He was also a prolific writer of poetry. Helen would like to hear his opinion on Hilary Mantel’s trilogy which makes his nemesis, Thomas Cromwell, a hero. That would be an interesting discussion over a glass of wine!

Tess is hoping to have two guests: C.J. Sansom who has written numerous historical mysteries set in the reign of Henry VIII; Tess is hoping he will be accompanied by the afore mentioned Hilary Mantel who writes about the same period. It seems Hilary is rather a popular choice with some Page Turners. I hope both guests enjoy the Welsh cakes, a Tess speciality, that may be offered to them!

Babs would send her invitation to Marian Keyes who has written numerous novels including ‘Rachel’s Holiday’ and ‘Grown Ups’. Babs started to read her books in the late 1990s when she says she was at her most miserable…A friend told her they would cheer her up, which they did as Babs enjoyed Marian’ s humour. Babs and Marian would hopefully enjoy a happy and humorous conversation about her books together with some chilled wine.

Sandra would invite Victoria Hislop whose novels include ‘The Return’, ‘The Thread’ and ‘Those Who are Loved’. Sandra loves history and feels that Victoria has taught her a great deal about Greece and its people, as many of her novels are stand-alone titles based around historical events in Greece. Sandra wonders whether she should offer Victoria Greek cuisine as they sit and chat about Greece and its history. I’m sure Victoria would love a kebab!

Margaret Atwood would have been one of my choices for a dinner guest. Then I read that 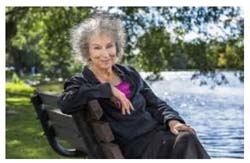 Who would YOU like to invite to your post coronavirus dinner party…do you agree with our choice of guests? We hope this list of authors and their novels has given you some food for thought and tempted you to pick up a book…or two.