The Trip of a Lifetime? The Galapagos

Inspired by David Attenborough’s 3 part documentary, and the tales of friends who visited 15 years ago, we decided our retirement present would be a trip to the Islands of Tortoises, better known as the Galapagos Islands. Situated in the Pacific Ocean, some 600 miles off the west coast of Ecuador, the Galapagos were, of course, made famous by Charles Darwin who, having visited them, came up with his theory of evolution, “The Origin of the Species”. 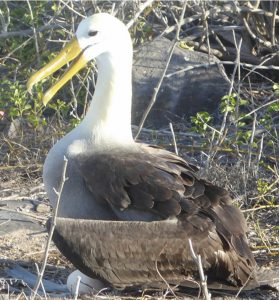 We flew to Quito which is situated in the foothills of the Andes. At 9,500 feet, it is the second highest capital in the world (for quiz buffs – La Paz, Bolivia is the highest). The city was founded in the 16th century on the ruins of an Inca city. It has the best preserved, least altered historic centre in Latin America and has been declared a World Heritage Site by UNESCO. The Spanish colonial buildings dating back some 500 years are impressive but it’s the interior of the Jesuit cathedral of La Compania that sticks in the mind for its gold leaf work, gilded plaster and wood carvings.

It’s just over a 2 hour flight from Quito to the Galapagos Islands and from there we took a short bus and boat ride to our cruise ship which became our home for the next 7 nights.

All 19 islands of the Galapagos are there as a result of repeated volcanic activity – they simply rose up from the seabed. This, and their isolation from the mainland, begs the question as to how they have come to be inhabited by such a variety of plants, animals and birds, some of which are found nowhere else in the world. The theory is that their ancestors were somehow brought here by the sea currents; the islands being located at the confluence of 3 ocean currents. The same theory goes for the birds – though substitute air currents for sea.

In order to survive the inhospitable volcanic terrain the animals and birds learnt to adapt; those that didn’t, so the theory goes, died. Some of the iguanas learnt to swim and forage in the sea for food; the marine iguanas can now drink seawater and snort the excess salt out through their nostrils. The cormorants found that they didn’t need their wings and these shortened over time so that the birds are now flightless. In order to survive the heat the penguins became shorter. And the famous Darwin finches? Well, over time the size and shape of their beaks changed on the different islands, in order toaccess the different types of food available to them.

The isolation of the islands and so few predators means that the wildlife have little fear of humans. Talk about getting up close and personal. We were told to keep at least 8 feet away from the animals – the problem was that no-one tells them that. And sea-lion pups are very inquisitive and very cute; and so your head tells you to back away as they come up to you whilst your heart says other things. I could certainly see from their lack of fear how the dodo came to be extinct in Mauritius. The giant tortoise was lucky not to have suffered a similar fate. Pirates and whalers came to the Galapagos from the 18th century and the tortoises provided them with an easy supply of fresh meat. The guide told us that they were taken back to the ships alive and then stacked upside down for ease of storage. In that cruel state they could survive for up to a year!

Ecuador appreciates the uniqueness of its islands and has got its act together on the ecotourism front. Fifteen of the 19 islands are uninhabited and form the Galapagos National Park, which, in 1979, became the first UNESCO World Heritage Site. Around 30,000 people live on the islands and some 2000,000 tourists visit each year. Tourism is strictly regulated. We went everywhere with guides who were born in the Galapagos, had been educated to university standard and really knew their stuff. They were very friendly and so obviously enjoyed sharing their knowledge of the islands with us. Having said that anyone who strayed off the path or lagged behind to take that extra photograph, my husband included, was suitably chastised! 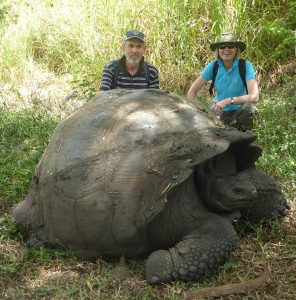 We saw so many wonderful things. The highlights for me on land were spotting our first blue footed booby and seeing an albatross nesting with its egg. In the ocean it was snorkelling with sea turtles and watching a marine iguana feed off the seabed. The sea was beautifully clear but freezing, even with a wetsuit. With minimum light pollution the night sky was also something special. We stared open-mouthed up at a very bright and sparkling Milky Way.

Well – was it a trip of a lifetime? Only time will tell of course …. but it will take some beating. Our next trip? Well that’s slightly closer to home. We’re off to beautiful West Wales – fingers crossed on the weather front and spotting a dolphin.