Welcoming A Fox Into Your Garden

Have you seen a fox in the village recently? The photo shows one in a Wenvoe garden at midday during last August and sightings from other residents are not uncommon. 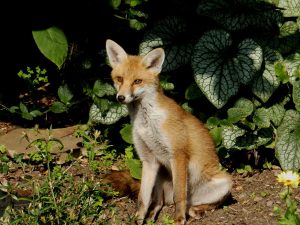 Whilst there is no clear demarcation between ‘rural’ and ‘urban’ foxes, ours are likely to be more of the countryside variety. However many urban areas of Britain have large populations of urban foxes and if you wander out from dusk onwards you might see several. And if you do not see any, you can read about them in the tabloids and how balanced is that reporting? One myth is that they are getting bigger and bolder. A 40 year study in Bristol found that urban foxes were no bigger than rural ones and had not increased in size over that period. In London it was found that some individual foxes were bolder than others but there was no evidence of any trend towards increased boldness. Ah yes, say the tabloids, but what about foxes attacking babies! Researchers suggest that there are no cases of ‘attacks’ although there are a few cases of babies being bitten, usually on the fingers, hands or lower feet. Unpleasant and distressing though this is the statistics suggest only 7 press reports of bites in the last 9 years. Over a similar period at least 21 people (adults and children) were killed by pet dogs.

The press will also regularly report foxes attacking pets. A fox can catch a wild rabbit but if it is a pet rabbit, it becomes an ‘attack’. Foxes attacking cats is another popular news item. Researchers however found that in a confrontation between cat and fox, it is the fox that is most likely to flee. Information on cats being taken to vets indicated that wounds on cats are 40 times more likely to have been caused by other cats than foxes. Cats are known to catch and kill young foxes so it is not surprising that there will be the occasional fight.

What do you think about foxes visiting your garden? A poll last year suggested that a third of those asked would not welcome them although a half did not want the neighbour’s cats in either. 14% of British adults actively encourage foxes to visit their gardens which the Daily Mail interpreted as ‘Cunning! How the fox has wheedled its way into the affections of 1 in 7 families’ Those devious, scheming creatures!

Whilst no-one could claim that foxes are vegan and altruistic animal saints, they are carnivores after all, maybe it is time for us to look at the evidence more objectively. For more on this theme, take a look at the article ‘Time to stop vilifying the urban Fox’ by Stephen Harris and, maybe, consider welcoming a fox into your garden.