The weather forecast was sunshine and showers but we only saw sunshine in the distance and had more than our fair share of showers. We set out from Llanblethian Church near Cowbridge, along the Valeways Millennium Heritage trail crossing a very full Factory brook.

We crossed a field where the remains of a World War II runway are visible and as we approached Siginstone, found an Air crash memorial slate which marks the 40th anniversary of a tragedy. ‘On Sunday 12th March 1950 a Tudor V Aeroplane returning from Dublin crashed 200 yards from this spot as it approached Llandow Aerodrome. 75 Welsh rugby supporters and 5 crew died. There were just 3 survivors. In Belfast the day before Wales had won the Triple Crown.’ The plane had done many relief trips to Berlin before crashing on its return from Dublin. Fans had a lot of luggage (souvenirs?) and it is thought this caused the crash. As a result airlines introduced baggage weight limits. 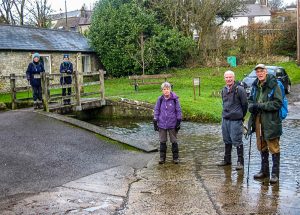 Next to the air crash memorial stone is Sigingstone Pond. We chatted to a man who lived in the house next to it and he told us that his father had the farm above the pond and cattle used to come down to the pond to drink. His grandfather would fill buckets at a tap in the wall above a spring and carry it up to the farm. 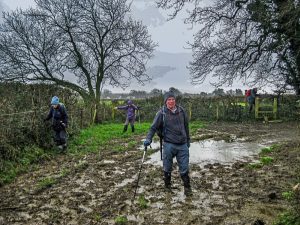 At the Victoria Inn, Sigingstone we turned onto a stretch that was particularly muddy with muck coming over boots; most of us carefully skirted the edge but one person ventured into the worst of it! We were relieved to emerge onto a long path between two hedges glowing golden in their winter coats.

We took the road to Crossways House passing what appeared to be its own sewage processing plant. The boundary wall at the front of the house proved an excellent place to sit and eat our lunch.

Between Penllyn (north of A48) and St Brynach’s Church are a series of coffin stiles, which consist of two stiles side by side with a wall between them on which a coffin could be rested as the stile is climbed. St Brynach’s Church was for centuries the parish church of Penllyn and remains its burial ground even though it is a mile away. It is thought that the stone traces of settlement close to the church are of Romano British origin and the ‘village’ was wiped out by the Black Death (14thC). The church boasts ‘no electricity, lighting or heating’.

Although the stiles on the Millennium Way were well maintained most of the others were pretty poor, sometimes surrounded by mud and there were plenty of double stiles! We stopped at the Bonvilston cafe for tea and they served us even though they had shut the dining room. (Walk 7 miles 650ft Map 151).