The weather was very wet on Saturday so the walk was rearranged for Sunday, when it was still overcast but dry. We parked near Tylcha Fach and took a south-westerly route towards Rhiwfelin and Rhiwfelin Fach across open farmland. We then took paths to Nant Muchudd which we followed to Pant-y Brad and Tonyrefail before heading back to Tylcha Fach. 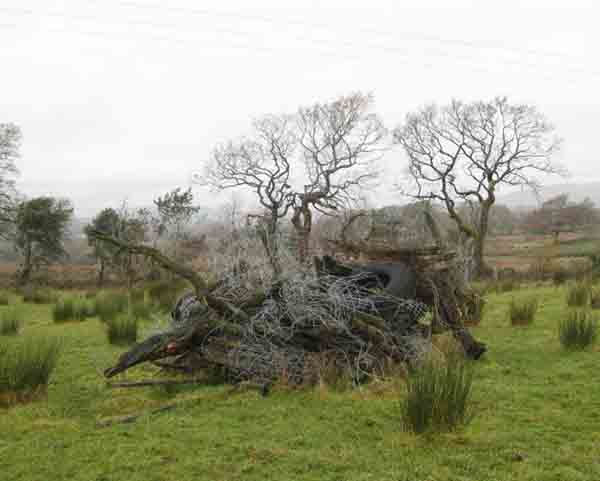 As we set off heavy clouds hung in the sky over our heads but it was not raining. We started on quite a steep gradient and were glad to reach fields where the going became easier. We came across a pile of discarded tyres and fencing which wouldn’t have looked out of place as an art installation but definitely wrong in the countryside.

We soon travelled beside very full streams and some splendid moss. As we climbed uphill from one stream we passed a tree which had honey comb in a hollow in its trunk; bees must have made a home here in the summer. A couple of farms had old boats in their yards – obviously they are used to heavy rain in these parts! At Tre Eric cottage farm the footpath was blocked and we had to climb over a barbed wire fence to carry on and then clear a stile hidden by a holly tree before we were able to follow a disused railway line, which was a good path. A huge ring of fungi about 6ft across with the individuals several inches in diameter glowed in the dim light under trees. 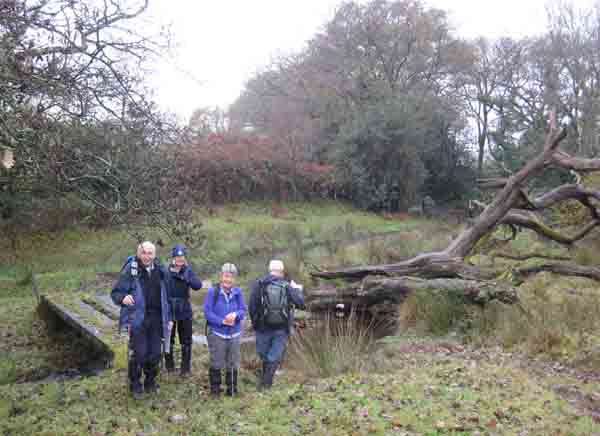 At Pant y Brad we were surprised to come across a plaque which read ‘Opposite on Nov. 16th 1326 was captured King Edward II (Edward of Caernarvon) the guide of captors was Rev Rhys Hywel’. The disastrous reign of Edward II came to an unofficial and humiliating end on 16 November 1326 when Edward II, guided by a Cistercian monk, went for refreshment to Penrhys. Heading for safety Edward was intercepted at Pant y Brad – the Hollow of Treason – in Tonyrefail. He was captured by agents of his estranged wife Isabella of France who had invaded England 7 weeks earlier. He was taken to Llantrisant castle and imprisoned overnight. Later he was held in honourable captivity at Kenilworth castle in Warwickshire. A few weeks later he was forced to abdicate in favour of his 14 year old son, Edward III, whose reign began on 25 January 1327.

Walking along the road we spied a group of 19 llamas (or maybe alpacas) in a field. As we walked

over to see them they ran towards us and were very friendly – probably thought we had food. We spent a happy few minutes admiring their shenanigans. 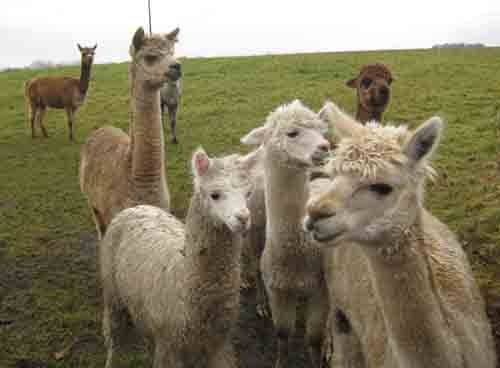 Tref-y-Rhyg school had a colourful wall with a field and rainbow and their values ‘positivity, patience, trust, respect, equality, care, pride and honesty’ written around the picture. A stream in full flow poured into a metal bath and then cascaded into a 2nd bath. We had a laugh as one of the group stood beside it and pretended to undress for a quick dip! Passing a flock of sheep they came so close that unusually some of us patted them. Descending the road we had climbed at the beginning of our walk we arrived back at the cars and went to Arthur Llewellyn Jenkins for a welcome cup of tea.