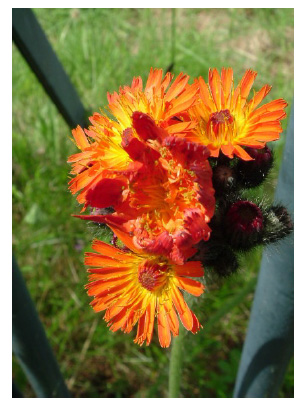 would appear orange and brown. Nice to see that gardeners had often mowed around them. They are a wildflower known either as Fox and Cubs after the colouring or more correctly as Orange Hawkweed. Not only are they attractive but insects enjoy them as well for their pollen. They never seem to cause us a problem but in Canada, North America and Australia they are regarded as a noxious weed as this extract from the Washington State Weed Control Board indicates:

‘It’s an aggressive, unpalatable competitor of pasture and range plant species, crowding out more desirable forage. It is a serious pest of lowland pasture, mountain meadows and lawns.’

This is often what happens when a plant is introduced from another country as we have found with Japanese Knotweed and Winter Heliotrope where there are no natural predators. Meantime enjoy your Fox and Cubs safe in the knowledge that it will provide a modest splash of colour either in the lawn or the border. It has been introduced to the wildflower section of the Elizabethan Orchard where it pops up each year but has not spread beyond the point where it was first planted.

Some people in the village have commented on the apparent lack of buzzards around this year – others say they still see them regularly. We nearly lost them in the 1950s (persecution and myxomatosis) but since then the numbers have increased steadily. Causes of death and high chick mortality are usually down to the lack of food, persecution by gamekeepers and taking poisoned carcasses. But if numbers have declined this year it is difficult to see that any of these factors will have applied and even if the chicks have not done well the adults should still be around as they can live for 25 years. What do you think?