The village hall in Cwmdu has an excellent car park (£1 fee). It was a cool morning for June and we wore layers as we set off along a small lane up the valley, following the Rhiangoll River.

We passed a cottage with a lovely garden containing a good variety of plants and in the hedge along the road we spotted the poisonous Monkshood (aconite). Foxgloves were also plentiful. There were two further properties – Upper Pentrebach farm and a cottage offering wool spinning before the track became a footpath. The mountains around us created a huge bowl and a buzzard soared high in the sky. As we travelled through Cwm Sorgwm we could see the blackened slopes of Mynydd Troed and remembered walking across it last summer through the remains of a mountain fire. We glimpsed views of the Dragonsback Mountain. 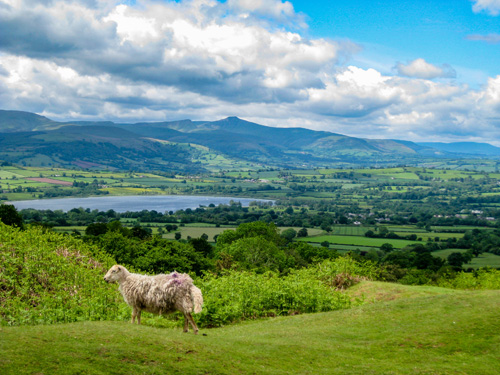 A stone on the side of the track had the inscription ‘Dinas Sir J Bailey Bart 1847’. This stone marked the boundary between Dinas and the estate of Sir Joseph Bailey who lived at Glanusk Park and made his fortune as an ironmaster, owning the Nantyglo Ironworks with his brother Crawshay (they were nephews of Richard Crawshay of Cyfartha ironworks).

There are another 2 boundary stones one of which is inscribed ‘Mrs MacNamara 1821’, a resident of Llangoed castle who with her husband bought the Llangoed estate. Curiously there are 13 stones in the Black Mountains bearing Mrs MacNamara’s name. John and Mary MacNamara married at Gretna Green in 1780; Mary’s father a Barrister at Lincoln’s Inn Court had not given his consent. They always retained a fashionable London address after buying Llangoed.

It is thought that they bought in Wales because Mary had Welsh heritage, both her parents were Welsh. She and her four children were the only lineal descendants of the ancient Wogan family who were Knights Templar and owned a great manor which contained Llangoed Castle. John died in 1818 leaving the estate in trust for his heirs but Mary and her eldest son had joint responsibility for it. She redirected the public road away from the river Wye so that the banks could be enjoyed as a beauty spot and acquired other property. It is possible that the boundary stones were set in place as boundary issues were settled. After Mary’s death her son sold the entire estate to Joseph Bailey. Mary MacNamara was buried in 1836 in Wimbledon.

As we continued the lane narrowed and we were walking across grassland. Rounding Cockit Hill the gradient started to increase. Llangorse Lake came into view and although it was some distance away we could see waves on its surface and a few sailing boats. A lone sheep posed as we gazed across the lake to Pen y Fan in the distance. A mare and her pretty foal grazed on the hillside. Then it was a fairly steep climb to the top of the hill and we were being whipped by a north-westerly wind. Brrr! It is thought that this end of the ridge may have been defended as a Hillfort during the Iron Age (1200BC- 74AD). 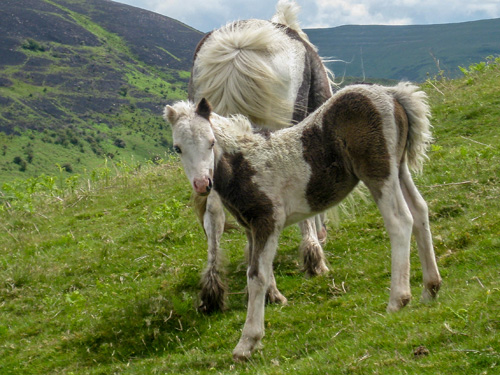 We opted to have lunch as soon as we reached the summit, as we were able to crouch down behind some craggy rocks out of the brisk wind. The green valley we had climbed through was laid out below us and we faced Mynydd Troed with Waun Fach to our right. At the col between Mynydd Llangorse and Mynydd Troed there is a tiny car park where a couple of cars parked giving a shortcut to the hill.

Setting off again we travelled a green path along the ridge being beaten by the wind again. A tiny bedstraw flowered extensively across the grassland and larks rose but quickly came to ground again. We hadn’t gone far when we saw off road motorcyclists crossing the lower slopes of the mountain. We quickly reached the trig point at the top of Llangorse Mountain. The spectacular 3600 views were well worth the climb, majestic hills and open countryside vying for our attention. 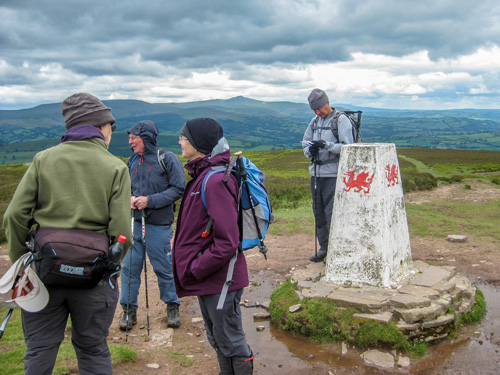 Completing the ridge we descended via the Beacons Way. A tree covered in creamy white blossom had rooted itself in a spring at the start of a stream. As we came off the mountain onto a country lane we passed a tumble -down farm where the greenhouse and car, although old, looked more weather proof than the tumble-down house! After half an hour or so we cut across a field and were on a final stretch of road where the hedge contained a froth of pink fumitary. We had walked 7¾ miles with an ascent of 1450ft and only 1 stile. Bliss! Map OL13.

The Saturday walking group were shocked and saddened that Ethel Kennett, one of our long term members, had died suddenly. Her involvement and support could always be relied on. We shall all miss her.