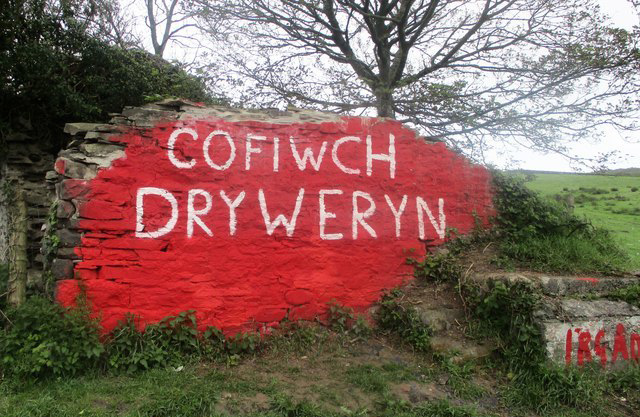 Since the vandalism of the ‘Cofiwch Dryweryn’ mural near Aberystwyth earlier this year, I’ve noticed ‘Cofiwch Dryweryn’ signs reminiscent of the original appearing all over Wales – and all over the world, too. It feels like a nation coming together and showing that even if you try to silence us, we will continue to tell our story so that history won’t repeat itself.

But what’s the importance of ‘Cofiwch Dryweryn’?

‘Cofiwch Dryweryn’ means ‘Remember Tryweryn’ in Welsh and is in reference to the drowning of the Welsh village Capel Celyn (the valley was Cwm Tryweryn) in 1965.

The Capel Celyn Defence Committee was set up, in addition to the Liverpool branch of the Tryweryn Defence Committee. On November 7th, 1956 the Committee sent representatives, including the president of Plaid Cymru, Gwynfor Evans, to address Liverpool City Council. The three were escorted from the chamber, and Gwynfor Evans was shouted down. They were fighting for a chance to save their village, because an English city deemed many in Wales becoming homeless as a reasonable sacrifice for their water. The only thing is, Liverpool wasn’t the place having to make the sacrifice.

In January 1957, Liverpool began its attempts through the parliamentary system. Obtaining authority through an Act of Parliament meant Liverpool City Council managed to avoid the need for consent from Welsh planning authorities. Wales were silenced and refused the right to argue to save Capel Celyn. Wales wouldn’t earn a Senedd for decades, and the lack of devolution in 1957 meant Parliament in England could do what they wanted to Wales. 36 MPs alone were in Parliament on behalf of Wales, but their numbers were too low, and their opposition seemed futile.

Eight years after the fight had begun, the residents of Capel Celyn were forced out as the flooding drew near. Alun Ffred Jones, who was 15 at the time of the flooding said of the opening ceremony for Llyn Celyn, “These people had drowned this village and driven people from their homes, and they were suddenly arriving to have a tea party”. The displeasure shown by the residents of Capel Celyn at the time has been consistent since the drowning in 1965.

The drowning of Capel Celyn is unforgettable because it was almost reminiscent of the treatment by the Welsh people under English rule centuries earlier. By working around giving Wales the opportunity to fight the drowning in any legal way, Liverpool twisted Wales’ arm behind its back and made it obey. The Welsh were second-class citizens following the betrayal of Llywelyn ap Gruffydd in 1282, and the ‘Cofiwch Dryweryn’ mural is so honoured because it reminds Wales that history can repeat itself unless we find a way of fighting back.

The continuous vandalization of the ‘Cofiwch Dryweryn’ mural has incredibly backfired, with many flocking to the site quickly to repaint and later rebuild the wall. A wall behind the original site has since been painted ‘fe godwn ni eto’ (‘we will rise again’). Dozens of ‘Cofiwch Dryweryn’ murals have been appearing all over the world. Through Wales, some in England, even in America and Spain. The resilience of the Welsh people is sensational, and it will forever make me proud to call Cymru my home. ‘Cofiwch Dryweryn’ is a symbol that Wales won’t lie back and accept oppression.

The drowning of the Tryweryn valley in 1965 sparked so much anger throughout Wales that it aided in the revolution and evolution of the Welsh language, to a point where Cardiff Council is now being urged to only open Welsh language schools in the years to come. The fact that Wales was so easily stepped upon caused a want for more power in Wales, and today devolution is an ever-changing improvement in Wales, with powers slowly but surely moving back to where they belong – the Welsh people’s grasps.

‘Cofiwch Dryweryn’ isn’t meant to be a middle-finger to every English person, it’s meant to be a symbol of power to the Welsh people. To remember that we deserve more than the insult that occurred with Capel Celyn. To remember that a fair democracy should mean that Wales earns a voice within Britain, and that next time it’s not overlooked.