The “Thursday Walkers” are an afternoon social walking group who meet monthly. The walks are organised by Bert and usually cover some 5 miles with a cut-off point for those undertaking a shorter route. They also include a visit to a coffee shop either during or at the end of each walk. 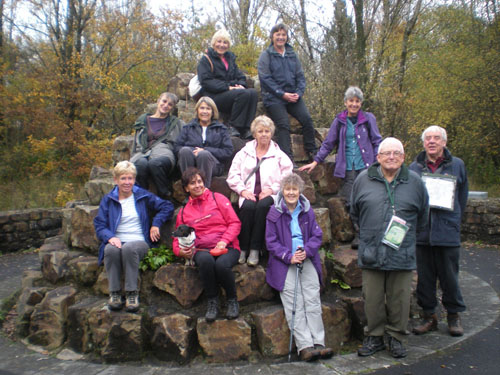 The photograph was taken during a visit to the Parc Slip Nature Reserve Tondu and shows the group sitting on the monument to the 112 men and boys who died following an underground explosion at the coal mine on 26 August 1892. In total some 112 stones have been used to create the monument.
The mine, which commenced operating during the 1860’s, was closed in 1904, but was re-opened as an opencast mine from the 1960’s to the 1980’s.
After landscape restoration work, Parc Slip became a nature reserve in 1999 and is managed by The Wildlife Trust of South and West Wales. The reserve has a number of paths for visitors to take walks which are well sign posted. There is an excellent coffee shop in the reserve and Trust volunteers’ are usually on hand to give advice etc to visitors.
Colin