We mentioned Lichens in a previous issue of Whats On and with the launch of the new Lichen Trail down at Goldsland Farm in the next few months it is worth reviewing why they might be on interest to anyone. As soon as you walk out onto the pavement you will find yourself treading on round or irregular white and yellow blobs. They are on walls, roofs, fences, trees and the gravestones in the churchyard. In fact they are the dominant species on 8% of the 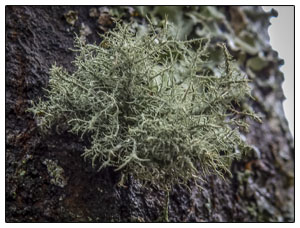 world's land surface whether on the frozen tundra, arid deserts or forests.

They have their uses. They are eaten not only by reindeer but by people – Iwatake is a delicacy in Japan. They have been used for dyeing for centuries and are mentioned in the Old Testament. They were once a considerable cottage industry with the lichens being scraped off rocks by people with metal hoops or even seashells and then processed in factories. One near Glasgow covered 17 acres and worked its way through 250 tons a year.

They have been used in the perfume and cosmetics industries since the 16th century and if you use Calvin Klein, Estee Lauder or Yves St Laurent you will have been applying some lichen extract to yourself. Some have antibiotic properties and were used in babies nappies in New Zealand. Popular in folk medicines and used to indicate pollution levels and the presence of metals, they are now being considered to help clear up or extract toxic or valuable metals.

Despite the fascination of lichens very few people study them so experts are few and far between. If you are a teacher, particularly at the Primary level, the topic opens up all sorts of possibilities linking into other disciplines such as design, medicine, art, environment and nutrition. If you are interested, get in touch with the Wildlife Group who will be happy to work with you to produce audio-visual presentations, teachers notes and short outdoor activities.

The Wildlife Group commissioned a survey at Goldsland in preparation for the Trail and this identified 21 different species close to the barns. Interestingly, there were no examples of the lichen featured in the photo which is an Usnea species. These are intolerant of high levels of nitrogen which is exactly what you would expect in and around a dairy farm. This photo was taken on the trees close to the library in the centre of Wenvoe.