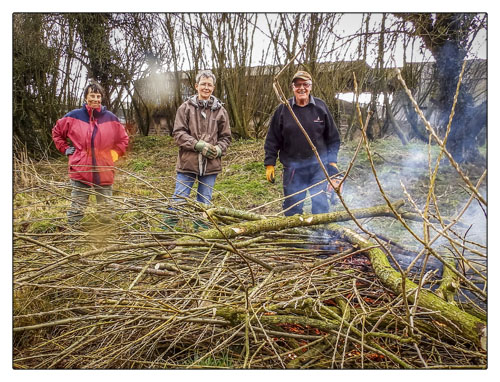 By the time you read this the Upper Orchid Field should have been cut. We are delighted to be working in conjunction with a local contractor and by ensuring that the field is not only cut but the vegetation removed this will help the wildflowers to flourish. It will be cut again in late September and thereafter annually in the Autumn. We have heard that we have been successful in obtaining a grant from Grow Wild. This money will be used up at Goldsland farm where we shall be planting wildflower plugs and creating an orchard meadow – a relatively rare habitat in Britain. Our main focus will be on the creation of fungi beds which will enable visitors to understand and get close to fungi. We have started planting a new orchard at Goldsland which will include some rare and interesting fruit trees such as Gabalva and Kenneth. Cadwallader is an example of a cider apple and we have three varieties of specially grafted Perry Pears, namely Gwehelog, Gwehelog Red and Blakeney Red. Work continues around the Watercress beds where we have pushed back the brambles and cut down some willows – see photo. The latter will regrow from the base and produce material that can be used for basketry and other woven goods.