Yellow Fish? In Wenvoe? We hope so, sometime in April or May. So what is this all about? The Yellow Fish campaign involves using a stencil to spray-paint yellow fish alongside street or storm drains. This UK-wide project is already underway and its purpose is to draw our attention to street drains and the need to prevent them getting polluted.

Broadly-speaking we have two sorts of drain. Everything in your household should go into foul or wastewater drains – from your toilets, baths, basins, washing machines and dishwashers. The liquid is treated at water-treatment sites and then discharges in a purer form into our rivers and oceans, but street drains are there to carry surplus water off our roads. They do not go to treatment works but discharge straight into our brooks, our rivers and our seas. So anything you put down these drains or allow to flow into them will pollute our watercourses.

So the first issue is to have a think about what you might let get into a nearby street drain. Ever washed your car using detergents or been tempted to tip that surplus bit of oil, paint or antifreeze down the drain? Or allowed litter to slip through the grille? Car wash centres are usually better because the run-off is captured or processed. If you wash your car at home consider using biodegradable and phosphate-free products which are less harmful to the environment. Take that unneeded oil to the Barry Recycling centre at the Atlantic Trading Estate.

The next issue may come as something of a surprise but a significant number of home appliances are incorrectly connected and discharge directly into street drains. Welsh Water have estimated the figure at 20% and another survey found misconnections included many toilets. Next time you dip your toe in the sea at Barry Island remember than an estimated 9% of pollution in bathing areas results from incorrectly connected drainage. If in doubt, get your connections checked. 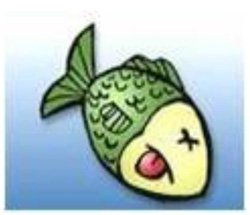 Does it matter? If you care at all about wildlife – yes! When oestrogen gets into the water it affects the reproductive cycle of fish. Untreated sewage uses up oxygen and our rivers can no longer support insects and fish and those that depend on them like birds and mammals. And if you are still feeling a bit indifferent, remember that, if you are caught causing pollution such as with misconnected appliances the fines can be severe, running to tens of thousands of pounds. So look out for the Yellow Fish which should be appearing in the early summer. And don't worry – a chalk-based spray is used to create them which is non-toxic and will wash away with our ever-so predictable rains.