Goldsland farm has a great story to tell. A working farm of around 200 acres producing milk with a herd of 180 mixed Holstein Friesians and Dairy Shorthorns and regularly winning awards at the Vale of Glamorgan Show, such as Best Holstein Exhibit and First, Second and Third in the Best Dairy Cow category (2016). It is farmed by Abi Reader who was Welsh Woman Farmer of the Year in 2016. The farm has a viewing platform above the milking parlour and regularly receives visits from school parties and other groups. 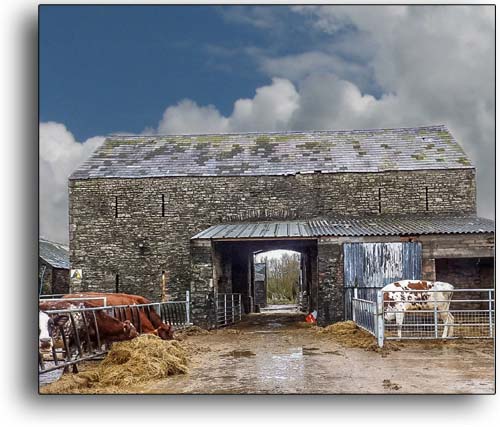 But there is also plenty of history. Excavations at a nearby cave in the woods revealed the 5,000 years old remains of humans along with a flint saw blade and other tools. One of the barns is a Grade ll listed building dating from the 1800s and described as a larger than average early to mid 19th century barn from the age of agricultural improvement. Around the same time watercress beds were introduced, fed bys. The three sections could be split into different habitat types, possibly one of mainly open water, a second with water plants and the third reeds. Two benches have been put in along with a noticeboard and large bee hotel.

With the help of money from Tescos a Nature Trail is being created which takes you from fields to ponds, to woods via a sunken lane, to meadows and finally an orchard. The orchard will consist of old varieties planted traditionally, many dating from Victorian times and including a variety we have not planted before, Gabalva, a cooker from Cardiff. We also have a couple of appropriately named Holsteins. Some Perry pears are being grafted for the autumn. The wildflower planting will include a small meadow and raised beds with annual arable flowers.

Also in the pipeline is a project to create a series of reed-beds to process slurry from the farm. The outflow will be much cleaner water and this will help to improve the water quality in the Goldsland Brook which runs through the farm and the Weycock River which the brook feeds. It also creates yet another habitat which should benefit wildlife in the area.

A Public Right of Way runs through the farm and if this has whetted your appetite to see more the farm opens its doors to the public on Open Farm Sunday which takes place on Sunday 11th June. This popular event which attracted 2,000 visitors in 2015 gives an opportunity for everyone to see the farm in action, to watch the cows being milked and for children in particular to get close up to animals. For more information about the wildlife and history projects, contact the Wenvoe Wildlife Group.