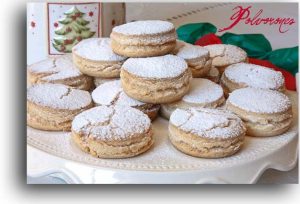 Icing sugar to coat after baking + extra to serve

Use an electric mixer, hand held or stand type, it does get hard. Beat the butter in a large bowl until it becomes light and fluffy. Add the sugar and beat until well blended. Beat in the flour in two goes, and then the ground and chopped walnuts. Divide the mixture into two, forming into two balls. Wrap seperately in cling film and chill in the fridge for about 30 – 40 minutes. On a floured surface roll a ball into a long sausage and divide into 25 pieces. With floured hands roll each piece into a ball and place on a buttered baking tray about 1/2 inch apart. Bake in the oven for about 18 – 20 mins until the base is golden brown and the top is just pale golden in colour. Remove from the oven and cool on a wire rack. Repeat with the second ball of mixture. While the second batch are cooking, roll the cooling Pol-vores gently in icing sugar and return to rack. Sprin-kle more icing suger over to serve. 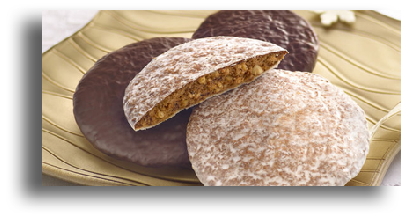 Sieve all dry ingredients into a large bowl and mix well. Melt the honey and butter in a basin over sim-mering water until butter melts then pour into flour mixture. Add the lemon juice, lemon and orange zests. Mix well with a hand held mixer until the dough is thoroughly combined.Cover with cling film and cool in the fridge overnight to let flavours com-bine. Divide dough into two and on a floured surface roll each one into a sausage. Divide each half into 12 -13 pieces. With floured hands roll each piece into a ball and flatten into a disc about 10mm thick. Divide the discs between buttered baking trays and bake for about 15-18 mins or until touched lightly no inprint remains. Cool on wire racks. While still warm, glaze the lebkuchen with icing glaze, made below.

Mix icing sugar and egg together to form a smooth, runny icing. Brush each cookie with the icing, leave to dry completely.