Our drive to the beginning of this walk was very promising as we climbed quite a way, passing narrow terraces in Abercarn, to arrive at a parking area in the forest near Llanfach. It was a misty day, no rain but we were surrounded by light clouds.

We started out on good forest tracks, as usual heading uphill. After a while we came to an area where some extensive tree felling had been done. The track was totally covered by wood – branches, sawdust and twigs – making the going quite hard but at least there was no mud. In view of the tree felling it was decided to alter our plans and stay on the main track rather than branch off onto a footpath. A good decision as the footpath was very steep! 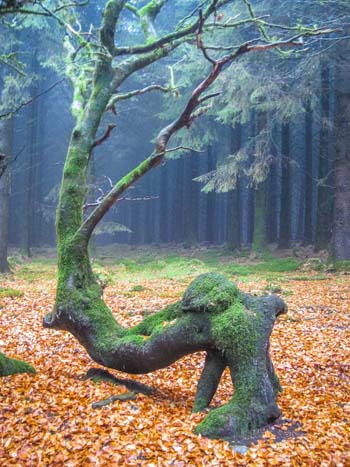 All morning we walked uphill along Nant Gwyddon, through some glorious autumnal colours yellow from the larches, browns and oranges from beeches, oaks, and other species. One tree drew our attention as we debated which animal it most resembled – an elephant from one side and a stag from the other. The route continued up Craig y Trwyn and then northeast to the edge of the forest. Although cloudy it was a warm day for November and we became pretty warm ourselves.

As we emerged onto moor land visibility was quite low, so we decided to take advantage of a line of pylons to guide us and walked towards the nearest one before turning east. A track followed the line of pylons which made the going easy and at last we were on level ground.

When the pylon line changed direction, the shape of the pylon arms changed to carry the tension of the power line as it turned the corner. Just beyond here was a radio mast on Mynydd Llwyd which indicated that we should turn south and then southwest back towards the woodland. On this stretch we could see sunlight shining over the land in the distance and the clouds around us dispersed as they lifted but it remained overcast where we were.

Before re-entering the woods, we stopped for lunch on a grassy bank, overlooking a valley of autumnal colour. The ground around us was covered in tiny examples of several different types of fungi, which could only be seen because they were so close.

Now it was downhill through the forest and we could see our morning path across Craig Pant-glas. As we continued a slight breeze stirred the air and it appeared to start snowing – the fine larch needles drifting in the same way as snowflakes do when they first start falling. It created a lovely atmosphere and brought a smile to our faces.

Returning to the cars we had walked 8.8 miles and climbed 1300ft (so much for thinking we were doing most of the climbing by car at the start). We drove down to the visitor centre in Cwmcarn for a cup of tea, at 90p a cup or £1 a large cup – very good value. Map 166.

Efail Isaf and the Garth

We parked in Efail Isaf on a bright morning and set out on good paths towards the Garth. A steady climb across open land allowed us to arrive at the trig point on the top of Garth hill surprisingly easily – much easier than the steep climb from Gwaelod y Garth which we had done in the past. Garth Hill burial mounds are four early – middle bronze age (around 2000BC) 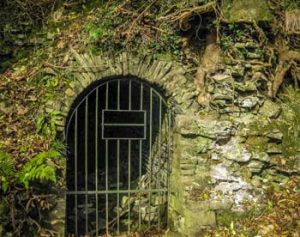 round barrows, the area is within the parish of Pentyrch. A brief stop for a summit photo and we were descending towards Soar.

The sun was shining and now and again, as a gust of wind blew, a scattering of leaves fell from surrounding trees looking like a golden rain shower. There were some fine fungi covering an old tree stump being used as a gate post and also lots growing at our feet.

We made our way northwest and north past Gwaelod-y-garth towards Coed y Gedrys, passing what appeared to be an entrance to a drift mine. Now the forecast cold wind started to blow and the temperature began to drop. We had lunch in an open area overlooking an Industrial Estate to the east in the Taff valley and open land to the north. We really appreciated the heat of the sun as the wind cut into us.

We headed generally east towards Tonteg Unexpectedly we came across a cardboard cut out figure high up in a tree – reminiscent of Boris Johnson’s zip wire ride. 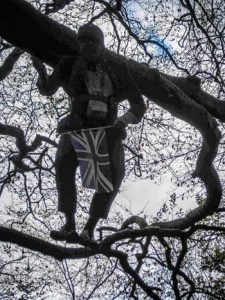 Returning to Efail Isaf we walked through a large number of rather nice new houses before getting back to the start. Another 8 miles and 1300ft walked. We went to Arthur Llewellyn Jenkins on the way home, where we had huge pots of tea – very refreshing. Map 151.