Sirhowy Valley Country park is south of Caerphilly, with 4 miles of flat well surfaced path along the former railway track. The entrance to the park follows the old railway and we drove past Full Moon, once the site of the Full Moon Inn and a small community of cottages but all that remains is the crossing keeper’s cottage. We parked at Nine-mile point car park.

It was a gloomy morning, but the air was fresh as we set off, not along the level railway but straight up the hillside to reach Mynydd Machen Common. The steep valley walls of bare cliff made it seem steeper than it is. A large tree had fallen across the path but luckily it was a good distance off the ground and we easily ducked under it. 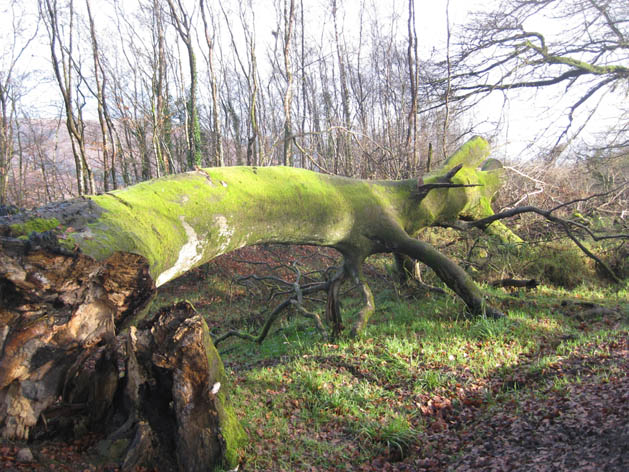 Up here we had good views across the valley, houses old and new nestling into the red hillside rising behind them. Ferns lift the spirits at this time of year in their winter russet coats (if you can look at them from a distance rather than walk through them!). The rain-soaked ground beneath our feet was soft but, in most places, there were stones beneath the surface, so we did not sink far. 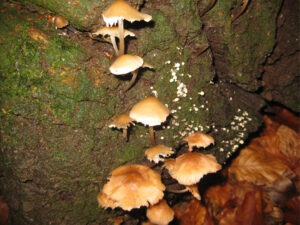 A feature of the walk was the number of fungi we spotted. Some traditional mushroom shaped glowing an orange colour, lacy frills around twigs and fallen tree branches and some climbing through dead trees. The trees looking as if they are being eaten alive by the fungi but of course they are only there because the tree is dead, and they are clearing the dead wood with many insects helping them.

The trees form sculptures as bereft of their leaves you can see their structure. A fallen tree covered in moss looked like a creature stalking through the wood. Old beech hedges, now several trees, with their lower limbs and roots exposed and wrapped around one another along a boundary were fascinating. Two trees apparently reaching out to each other as two branches were wedded together about 3ft from the ground, created a seat. An old stone wall was steadily being destroyed by a tree pushing its way through the restriction.

The sun came out and we enjoyed its heat and the views all around us. We found a relatively dry, grassy ledge to sit on for lunch, and gazed out at the distant Channel watching clouds blow across and then towards us, the view disappeared just as we finished. 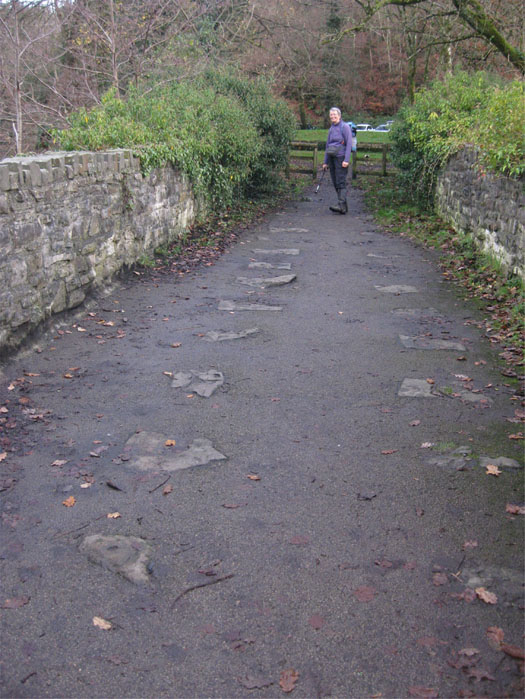 Now it was time to head downhill. Partly on a tarmacadamed road but also along a stretch of particularly muddy path, luckily there was a stream flowing down it and we walked in the stream to use the stones for purchase. Then the stream ran out and one of us (me!) slipped and almost ended up with their face in the mud! Apparently, it looked quite dramatic, but the landing was soft, and the only damage was a small graze and muddy hands and trousers. Some long, wet grass took care of the hands and we were on our way. Before long we arrived at the railway with a level walk back to the cars.

To the miners of the valleys a ‘journey’ meant a line of coal trams joined together. The Sirhowy Valley has been a place of journeys for the past two centuries. Iron and coal travelled down the valley by horse, canal, road and rail. Salmon and trout made their way up and down the river to mate or find their way back to the sea.

An intricate metalwork sculpture stood at the top of a post showing horse drawn carts, steam trains, cyclists and trees. Bright pink open-ended boxes hung from lots of the trees and we decided they were for detecting the presence of small mammals. It was a while before we could see the river at the bottom of the valley even though we could hear it and narrow waterfalls tumbled down the hillside to it.

The Sirhowy valley tramroad joined the Monmouthshire canal tramroad at Nine-mile point on its way to Newport. Sir Charles Morgan, of Tredegar house, and his business partner John Jones had a colliery at Blackwood and needed a new tramroad to get their coal to Newport. The Sirhowy company fought the construction of the new road. Only the threat of an Act of Parliament brought agreement and the Penllwyn tramroad was built by1824. By 1864 the practical use of the tramroad was finished as it was replaced by the railway. Penllwyn Tramroad Bridge crosses the river near Nine-mile point. it has an impressive arch and is a grade II listed structure, with the original stone sleepers still visible.