Margam Park – We are going back to February for this month’s walk, just a week after storm Dennis. The weather forecast was 40-45mph winds with rain later. This was enough for some of us to think that maybe we should be cancelling but we decided to give it a go. We were lucky – it was dry all day and windy but wind speed was only about 20-25mph. 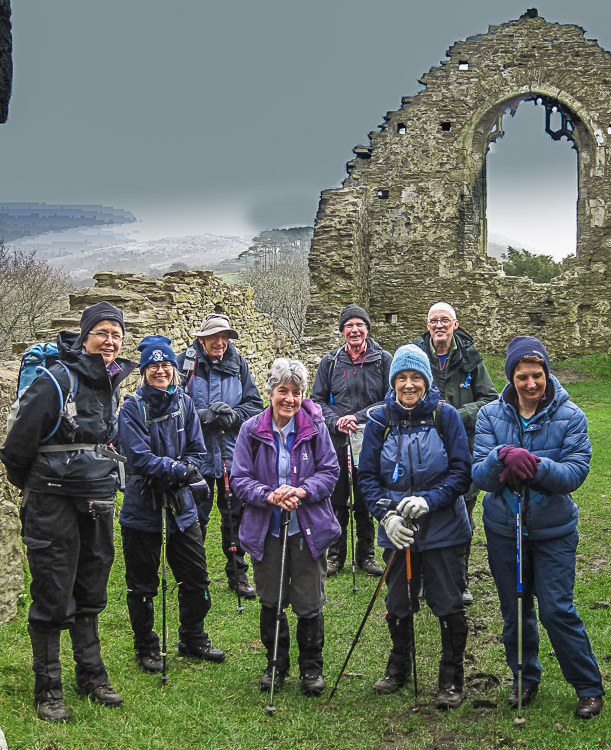 When we arrived at Margam Park there were two other groups in the small car park near the lake – one was Cardiff Ramblers which included people from Culverhouse X. The car park was very full as a result with us taking the last two places which involved some manoeuvring to reverse down the narrow track and squeeze into small spaces. An impatient driver who was probably upset that he didn’t get a space roared down the track going off-road to pass other vehicles coming in the opposite direction and spraying mud everywhere as well as thumping the bottom of his car quite violently on a large rock which produced a cracking sound!

The Margam deer herd roams through approximately 500 acres of parkland. It dates from Norman times, the herd, originally exclusively fallow, is of excellent genetic quality to rival any herd in the British Isles.

The water in the lake was quite high with lots of birds swimming around including at least two swans. Mute swans, coots, moorhens, Canada geese, mallard, tufted duck and pochard inhabit the lakes. Whilst the patient observer may see kingfishers beside the streams, skylarks, stonechats and wheatears can be seen over the grasslands with buzzards, kestrels and the occasional red kite in the skies. As it was February and quite cold we saw little in the way of birds whilst walking. We heard one when climbing but we actually saw just a couple of crows when eating lunch.

Margam Park owes its location to the monastery, which was privatised following the dissolution of the monasteries in 1537. We climbed to a ruin, which still has all four walls standing (at least in part). This was an outlying monastery building, Capel Mair ar y Bryn, (the chapel of St Mary on the hill). It is thought that its purpose was to allow members of the monastic community to fulfil their devotional duties, when engaged in keeping flocks, without returning to the main church. From here we could look down on Margam Castle. The house was built in 1830-40 at a cost of £50,000 using sandstone from Pyle quarry and as a mansion of exceptional quality it is Listed Grade I. The Castle has some spectacular features such as the vast stair hall and octagonal tower.

We followed the edge of a wood to pick up the Wales Coast path taking us towards Brombil. On the escarpment above the motorway is one of a network of early warning radar stations that were built along the coast from 1941 to detect German bombers and shipping during World War II. The Margam station is a scheduled ancient monument. Three flat-topped buildings stand high on the escarpment overlooking Port Talbot and Swansea Bay. They would have housed generators and control equipment, with large antennae on the roof.

Now we turned northwest into Cwm Brombil and crossed a small but fast running stream. The name of the valley and the atmosphere of the place made some of us think of Bilbo Baggins from Tolkein’s ‘Lord of the Rings’.

Climbing quite a steep track we looked down onto the ‘Blue Pool’ so called because the water is bright blue especially in sunshine. There were a group of wild swimmers enjoying themselves and inviting us to join them. They were obviously having a great time but as they left the water their skin looked bright red and raw with the cold. Brrr… 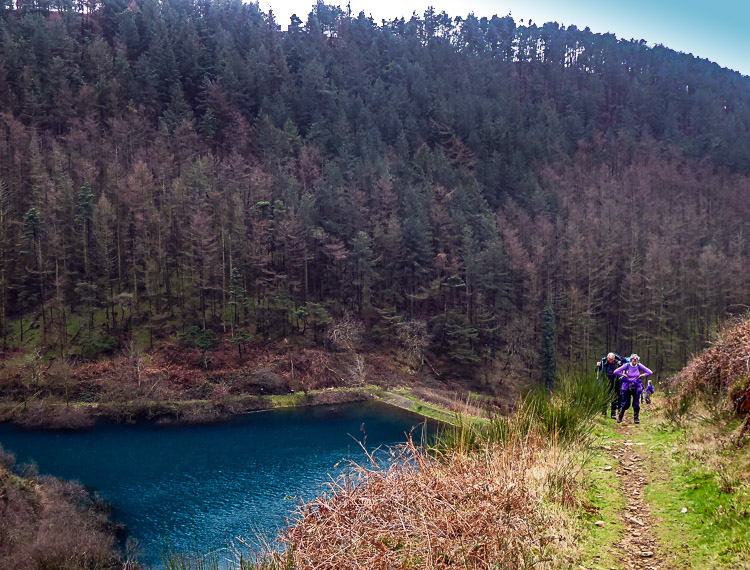 Although swathes of trees had been felled we soon entered the cover provided by woodland and stopped for lunch, half of us perching on tree stumps and the rest on grassy tussocks. It was cold here at the top of our walk and we could see our breath in the air. We spotted tadpoles in a puddle beside the path.

Towards the end of the walk we took a slight diversion to a wider path as we were concerned that trees or branches may block our planned route. The descent through woodland with gnarled and fallen trees was easier and coming into the open we could see our path etched in the hillside above us. It had been firm underfoot throughout the walk which was a bonus after the winter’s rain.

As we approached the lake again we spotted a ruin beside the path – a very posh boathouse? We retired to Pyle garden centre for welcome refreshment.