Aubrey Rees of Wrinstone Farm first encountered Gerry Crump when he gave the young 12 year old a lift home from the Sheep Dog Trials at Brynhill Farm, Barry. Little did they realise then that within a few years Gerry would have embarked on a career at Wrinstone Farm – one that was to span an amazing 75 years!

Early 1945 saw Gerry and his brother Ted strolling in the direction of Wrinstone Farm one Sunday afternoon. Gerry had always wanted to work on a farm. He had heard from Mr Thomas of Tarrws Farm that there was a possibility of a job at Wrinstone Farm. He was delighted when Aubrey agreed to employ him and shortly after that day Gerry started work on the farm.

Aubrey Rees lived with his wife Hilda, daughter Eileen (5) and 2½ year old son, Gwyn. Gerry soon became part of this happy farming family, sharing in their happy times and sad times over the decades. In fact Gerry’s mother always referred to Hilda as his second mum.

During the 1950’s Aubrey invested in a dairy herd. By now Eileen was busy working on the farm and when Gwyn left school he eagerly joined in with the farm work. Some years later Gwyn’s youngest son, Gareth, was also delighted to leave school to become a farmer.

Milk was taken in churns to the end of the lane, where it was collected, until about 1970 when a tanker started coming to the farm to transport the milk to Britton’s Dairies. 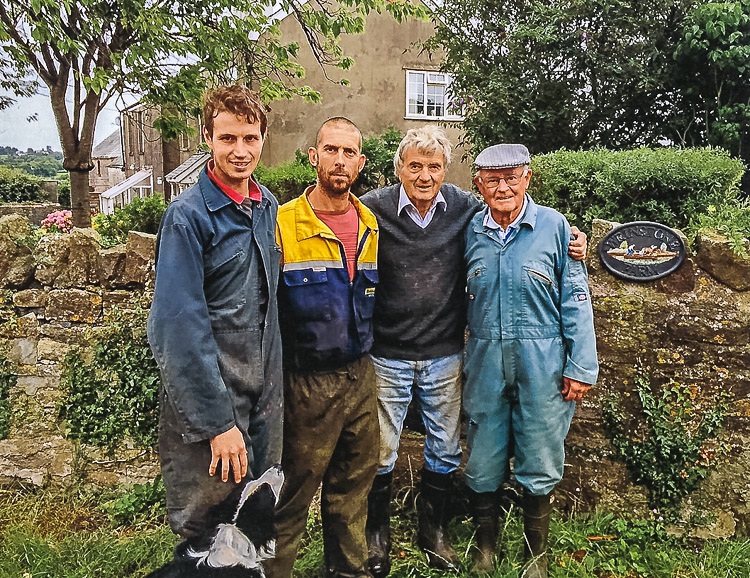 There are many examples of Gerry’s dedicated service to the Rees family. One special example was when he trudged across the fields to work and back home again, every day for 6 or 7 weeks. This happened during the severe weather and sub-zero temperatures of 1963 when the lane to the farm was blocked with snow drifts for many weeks.

Over the years Gerry has seen many changes on the farm. Rubber wheeled, large powerful tractors have replaced a Ford Standard tractor with steel wheels working alongside 3 horses (Punch, Jewel and Violet). There has been great advancement in farm machinery and long summer evenings pitching small hay bales are a distant memory!

Cattle numbers have increased gradually since the

dairy herd was sold in 2010. However, some things remain unchanged. Wrinstone Farm has always had field potatoes, cattle, chickens, a flock of sheep and, of course, sheep dogs!

During his long working life Gerry has always had great respect for his employers and their farm. He has maintained machinery with great care and has looked after the animals as if they were his own. Gerry has strived continuously to achieve high standards in all aspects of farm work and has always made his employers feel proud to have him.

Great commitment was rewarded when a long service medal was presented to Gerry in 1987 at the Royal Welsh Show. And he earned an award at the Vale Show in 2010 for 65 years of Service to Agriculture.

Gerry has now decided to take a well-deserved rest from farm work, but he will surely be spending many happy hours in his garden and with his wife, Phyllis.

Undoubtedly readers will agree that this story is not only special and remarkable – it is unique. Sadly Gwyn passed away almost two years ago, having spent many happy hours working with Gerry. He would certainly be so proud to have been able to share these congratulations to Gerry, on such a wonderful achievement. How many people do you know who have worked for the same family for 75 years, covering 3 generations of that family?