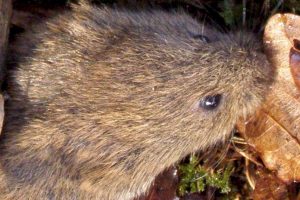 Wander into the countryside and you can easily spot birds and wildflowers. Even if you cannot see the birds you can often hear them calling despite being hidden in trees and undergrowth. But how many mammals will you see? Deer are not yet seen around Wenvoe but you might spot the odd fox or badger. Evidence of moles comes with the molehills often visible in early Spring before the vegetation gets too tall. And if you venture out on a warm summer evening you will see bats whether in the centre of the village or out in the countryside. But what about the many small mammals that we know are out there – the voles, mice and shrews? Not only do we not know how they are faring locally but even nationally there is very little information on how well or badly they are doing.

We do know that the UK has lost 500 native species of wildlife in the last 200 years including the extinction of 12% of our land mammals. Hedgehogs are down in the last 40 years from 30 million to 1.5 million. To our children and their grand-children Mrs Tiggy Winkle and Ratty (the water vole in Wind in the Willows) will be as remote as the wolf in Little Red Riding Hood (officially Britain's last wolf was killed in 1680). Here is a quote from the Act for Wildlife website:

‘Conservation must start at home in our back gardens, parks, cities and open spaces. The wildlife we have in the UK is fascinating and diverse and it is our heritage and responsibility’.

So what about our small furry friend in the photo? It is a field vole found alive and well on the Upper Orchid Field. They favour tussocky grasslands and orchards. One of the reasons the grass on the Community Orchard has been allowed to become tussocky is to encourage them and we know that they are establishing themselves there although whether there are 2, 10 or 100 we really do not know. Hopefully one day someone with the necessary survey skills will be able to give us a clue.