A Lot More Blossom About

By the time you read this there should be a lot more blossom about. In mid February we can see the first white splashes in the hedgerows of Blackthorn, from which you get your sloes, and early flowering cherries are popular in gardens. At the entrance to Clos Llanfair is a quite uncommon Purple-leaved Plum or Black Cherry Plum, one of the Myrobalan or Cherry Plum family. This variety is named after Monsieur Pissard, the French Head Gardener to the Shah of Persia, who sent the first one back to France in 1880. This is already covered in blossom which in a good year is followed by plenty of fruit. 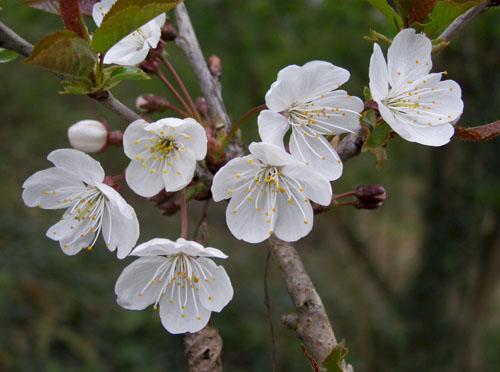 Whilst Blackthorn, sometimes called Quickthorn, is abundant in our hedgerows, there does not seem to have been much interest in planting other fruit trees in hedges and it will be some time before we see the next splashes of white; the Hawthorn, also called May blossom for the month in which it traditionally bloomed. One exception is Crab apple which does pop up all over the parish. It is not always easy to spot as it straggles up between the Hazel, Hawthorn and other taller trees but once the apples appear it is difficult to miss. However, in other parts of the country other fruiting trees have been planted which help the hedgerow to be more than just a stock-proofing fence. You have only to drive up to Herefordshire and towards Shropshire to see the masses of Cherry blossom by the side of the road. Faversham in Kent and Harrogate in Yorkshire also have spectacular displays. We have little growing wild in the parish although it has been planted in the Wild Orchard at St Lythans and the trees are already galloping skywards.

Most people around here will not have heard of Bullace but this wild plum, somewhere between a sloe and damson in size, is much more common in some parts of the country. The Wildlife Group have planted it in the Wild Orchard and in 2019 our jam and preserve expert, Daisy Graze, made Bullace jam which she considered one of the most flavoursome she had made. The real wild pear, Pyrus pyraster, is hardly recorded now in South Wales yet has been around since the Stone Age. You can find it planted on the edge of the Upper Orchid Field and, of course, the Wild Orchard. It can be very difficult to buy so it is hoped that cuttings can be taken and will lead to further plantings around the parish. The Wild Service Tree or Checker Tree is a rare native, samples of which can be seen growing above the cliffs of Jacksons Bay in Barry. The blossom is followed by a fruit like a small pear, often called Chequers and, as they were once used in the beer-brewing process, it is thought this led to many pubs being called Chequers. The tree is particularly good for a variety of wildlife. You can find them in the Wild Orchard but one also grows in the Community Orchard.

So, enjoy the blossom and the fruit that often follows. Find some space in your garden for these more unusual trees and encourage our Councils to include them in our park and roadside-planting schemes.