Kenfig became a National Nature Reserve in 1989 and an SSSI in 1950s. Inland from the beach is a complex landscape of dunes and wetlands covering about 1300 acres. It is home to many rare species of plants, insects, birds and animals. Kenfig is one of the wettest dune systems in the UK as the sand sits on clay. 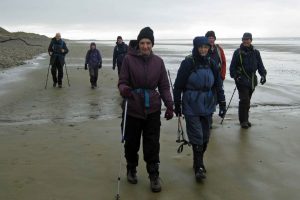 As we set off from the main car park we aimed for Sker House, near the beach, it is a deep yellow colour and probably the oldest house, in the area, still occupied. It was built as a monastic grange linked to Neath Abbey. Passing through the edge of the golf course we kept a sharp lookout for any flying balls.

The day was overcast with poor visibility – Port Talbot steel works largely unseen except for the flames. We skirted Sker house to make our way onto the beach which is a delight as you can stride out without looking where you are planting your feet – indeed one of our group was seen to break into a jog at one point – helped by the wind at our backs. We spotted the skeleton of a wrecked boat. Turning north and inland through a break in the dunes we had lunch in the shelter of a dune to get out of the wind, but pouring rain drenched us. Still we had a good view of a ‘lake’ below us –created by the heavy rainfall this winter.

Following the river Kenfig, we arrived at Kenfig castle – the site of a medieval castle and town. The BBC’s Time Team undertook an extensive exploration of the area – you can view the programme at https://youtu.be/VJwCaCBhD4U or go to YouTube and search for season 19 episode 8 of Time Team. 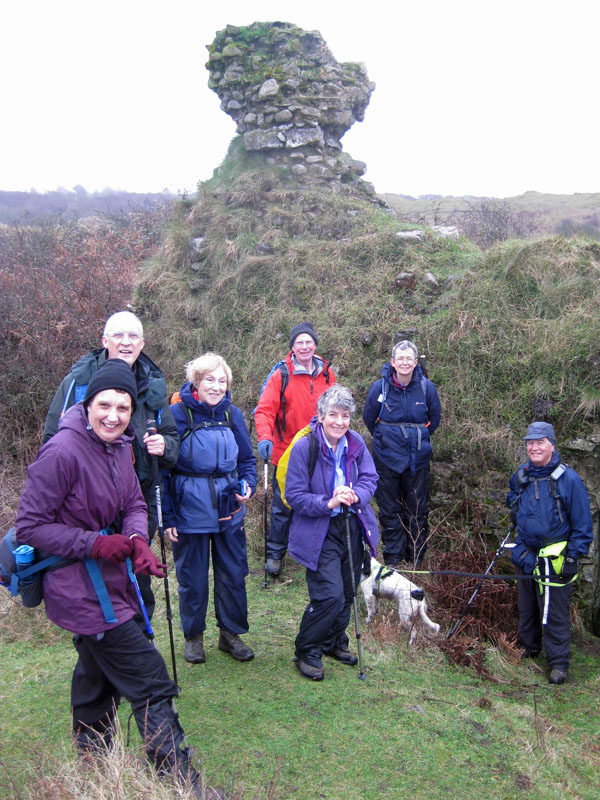 For 200 years from mid-12thC Kenfig was a thriving community. Then sand began to arrive and after another 100 years nearly everyone had left. The town was an Anglo- Norman settlement, established with the objective of asserting and maintaining rule over the Welsh population. It sat on the border between English Glamorgan and Wales to the north and west. It was regularly assaulted by the Welsh highlanders and burned several times, each time it was rebuilt but what the Welsh failed to achieve the elements did. High tides and storms deposited huge amounts of sand. Further north the dunes remained stable and it is thought that the destruction was partly due to human habitation as their grazing animals destroyed the vegetation which kept the dunes stable. Research shows that winds with speeds over 20 knots will carry sand and Kenfig is exposed to these on average 80 days every year.

There is a ditch around the castle with 2 roads running north/south and east/ west converging at the castle. The town was a large settlement extending outside the castle ramparts though the outer buildings appear to have been animal shelters, forges etc. which people will have used for their work. 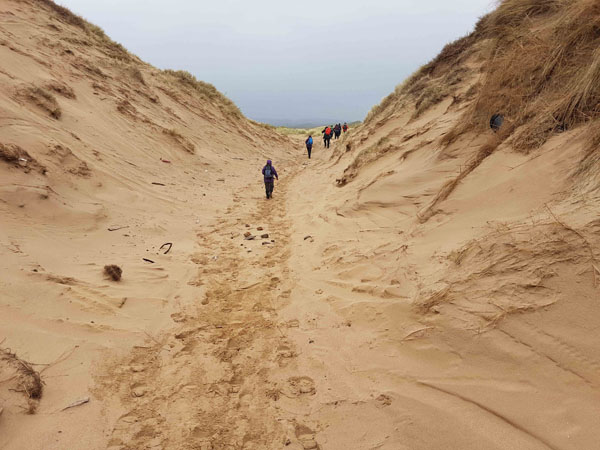 Making our way to Kenfig Pool we climbed to the top of a dune plotting our route through the flooded paths. We passed many trees up to their knees in ponds. At one point a boardwalk is provided across a marshy area. The only trouble being that the edge of the boardwalk was about 2ft from dry land with water deeper than the height of the tops of our boots – I was the lucky one that benefitted from lovely cold water soaking one foot with a cold sensation which soon warmed up. The soaking was forgotten until, taking off my boots, I realised that grit in the water had caused a fair bit of wear on my favourite socks! Boots had to be washed inside and out on returning home – a very rare occurrence.

On our way back to the car we came across some handsome cattle grazing; their coats warm brown colours – they were a mix of Highland Cattle and North Devon Ruby Reds.

If you are not a confident map reader and would like to visit the area, an easy option is to park on the seafront at Porthcawl, near Nottage, and follow the footpaths west along the coast. There is a choice between hard surface, grass and beach for large sections of the walk with numerous seats. A walkway covers a long stretch to protect the land which creates an easy walk.

I did this on a sunny and very blustery day (the day before storm Ciara) and walked into Kenfig Nature reserve before turning back the way I had come (about 5 miles flat walking). Visibility was brilliant and there were dozens of kite surfers out on the water at Rest Bay.

The walk can be extended by following the coastal path further into Kenfig.