We parked at Llanthony Priory, in the care of Cadw and freely open to the public. The hamlet of Llanthony nestles in the heart of the beautiful Vale of Ewyas. This is the easternmost valley of the Black mountains, described by Gerald of Wales in 1188 as ‘encircled on all sides by lofty mountains, but no more than three arrow shots in width’.

Here in this remote and tranquil valley an Augustinian priory was founded early in the 12th century. A wealthy nobleman, William de Lacy, sheltered in the ruined Celtic chapel of St David, and overcome by devotion decided to found the priory. The Augustinians, popularly known as Black Canons from the colour of their outer garments, were organised on monastic lines but were ordained priests going out to preach and hold services in nearby churches. Nothing remains of the original buildings as the monks were forced to retreat to Hereford and Gloucester by attacks from the primarily English community. The structures visible today date from the 13th century, when the priory was re-established and the Priory church built. Completed around 1230, it was closed 300 years later by Henry VIII during the dissolution of the monasteries. Later a house, now a hotel, was built amongst the ruins where the monks once lived and worshipped.

As soon as we got out of the cars we could hear the loud reverberations of bleating sheep. Nearly all of us peeped over the stone wall (it was high) surrounding the car park to find a huge flock of hundreds of sheep on the other side – had they been brought down for shearing or market? 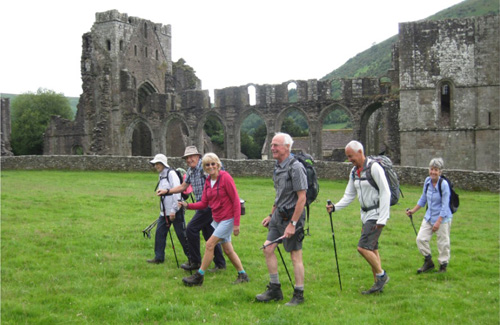 We walked past the priory taking the footpath towards Hatterall Ridge; it is quite steep in places but a lovely climb on good grass paths which narrow near the top due to bracken. We glanced back at the priory as we climbed and it appeared to shrink while the panorama of the countryside grew. The sweeping upland moorland is shaped by livestock grazing and traditional practices such as heather burning. Here a very special moth, the Silurian Moth, makes its home. The spring buds and leaves of the bilberry plant (known locally as the ‘whimberry’) feed the moth. The purple berries can be foraged by humans but they weren’t quite ripe enough for us. A sign reminded us that by law dogs must be kept on a lead between 1st March and 31st July and whenever livestock is nearby. This practice protects ground nesting birds such as red grouse.

A cairn marked the point at which we met the Offa’s Dyke path, the border between England and Wales. As we progressed along the ridge grazing horses came into view and larks briefly soared. On the side of the next ridge, in Wales, were curious circles shown clearly in the landscape we wondered how and for what purpose they were created. In one photograph I can count 17 of these circles and they seem to be connected by narrow tracks. A mystery!

We strode quite quickly along the ridge as the path is a pavement and thoroughly enjoyed the unusual freedom of not having to look where we were stepping. We took in the view around us: on our right and east, England relatively flat with rolling farmland and to our left, the wild hills of Wales and the Brecon Beacons National Park. 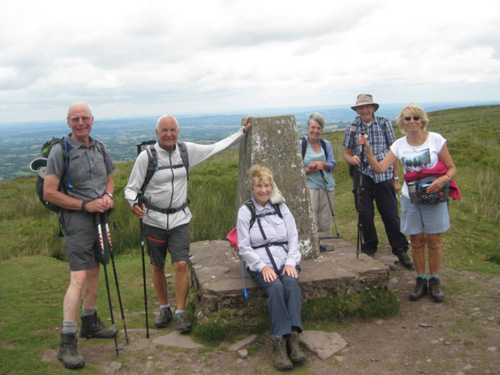 At a large cairn we stopped for a time contemplating and then turned towards Wales, starting our descent through the bracken covered hillside. We lost height quickly and came to a signpost directing us to Capel y Ffin. Now that we were lower the temperature rose and we enjoyed the local flora including some splendid foxgloves and thistles.

Arriving in the valley we disturbed a couple of black sheep, hiding in the bracken, and climbing a stile followed the road back to Llanthony. One of us had camped here many years ago and was able to share stories of all the various haunts they had explored.

On reaching Llanthony we walked around the ruins of the priory and the church of St David’s. A sign stated ‘Welcome to St David’s built on the earlier site of the monastic cell of 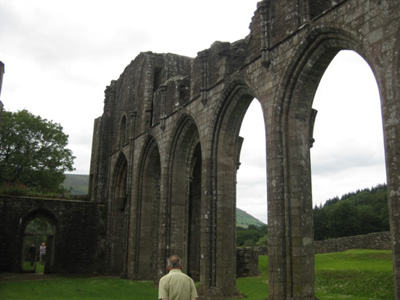 St David, patron saint of Wales. This is one of the ancient and holy sites of Wales and has welcomed pilgrims throughout its history.’ It had a peaceful atmosphere andone of its stained glass windows has a white dove against a rich blue background – beautiful.