It was a lovely morning but as we got out of the cars, at the Mynydd Beili-glas viewpoint, we did a group shiver – the wind chill factor really hit us and we quickly set out so that we could warm up.

It had been a week of wintry showers and the ground around us still had snow lying in patches. We were close to Graig a Llyn, the highest point in Glamorgan at 1969ft and below us we could see the road snaking up the hill, with a white car roaring up round the bends, as if it was in a Grand Prix.

We could also see Llyn Fawr, a lake which was made into a reservoir in 1911. When this was done a number of ancient objects were found in the peat at the water’s edge. These became known as the Llyn Fawr hoard and include 2 large bronze cauldrons, bronze axes, sickles and a sword. Probably dating from around 600BC they are among the most important Iron Age objects found in Wales; they are now in the National Museum, Cardiff.

Initially we walked on natural footpaths which soon became roadways for the vehicles which installed the Pen Y Cymoedd wind farm. One advantage of the wider tracks was that we had good views all day.

We decided to take a slight detour from our route to visit a memorial stone at the spot where the body of Willy Llewellyn, aged 5 years, was found. He was lost in Aberaman on 11th April 1902 and his remains found on 26th April, after a search by the whole community. Offerings of coins and small toys were on the stone.

We passed through areas where the trees had been decimated by fire and maybe the road building but new saplings were springing up. For lunch we found a protected area, sitting on tree stumps and fallen trunks, enjoying the sunshine. Tiny red flowers of moss covered one of the stumps. Bright yellow flowers of coltsfoot decorated the ground as we continued. 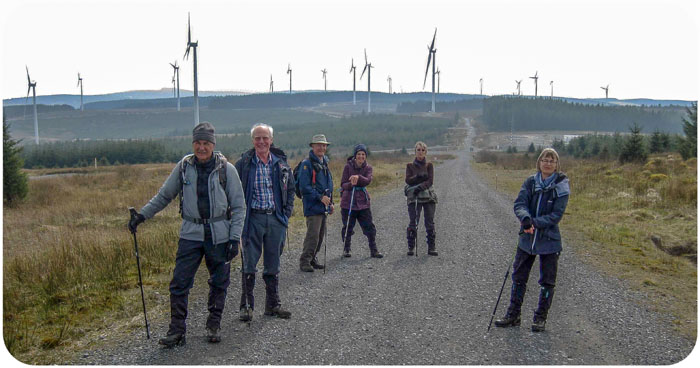 Now the 500ft wind turbines were towering around us. A series of notice boards provided information on the wind farm – 76 wind turbines produce an estimated output of 256MW. Natural Resources Wales state that there are 211 wind turbines planned for the Welsh woodland estate. The estimated output is 663MW (enough to power over 416,000 homes). The turbine footprint will be 450 hectares of land not replanted (20% of the estate). [Aberthaw Power Station generating capacity 1,560MW]

We met no walkers all day but a few cyclists, one of whom stopped us and asked for directions – he’d bought a map online and it was ‘being delivered tomorrow’.

Soon we arrived at the wind farm electricity sub-station where a large electrical installation loomed over us like a huge robot. From here we walked along a road through a forest of wind turbines and returned to the cars via our original footpath. The peaks of Pen y Fan and Corn Ddu in the distance were both covered in snow. 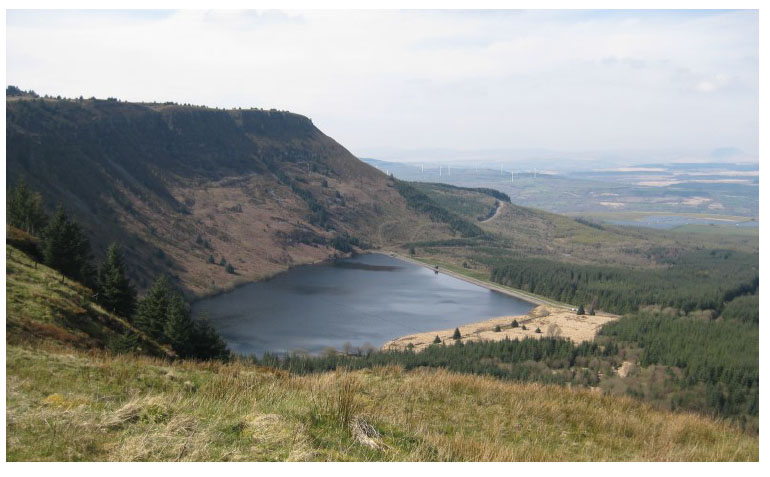 Hirwaun (long meadow) Common below us was gifted to the people for free grazing of their animals. Also in sight was the Tower colliery, closed as uneconomic in 1994 but run as a co-operative by the miners for a further 13 years until the coal finally ran out in 2008. Walk 8miles ascent 800ft. Map 166.