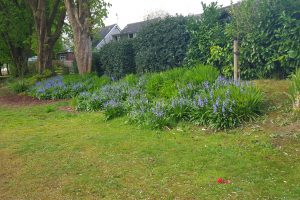 It has been a pretty good year for Bluebells and we are well blessed in the parish for the number of woods that are carpeted with them. With over half of the world's population of Bluebells being in the UK it is vital that we look after them but they are under threat from a number of directions. In the past many woods were stripped of bluebells by people selling them on to gardeners although with the current legal penalties on uprooting the bulbs this may have diminished recently. Then there is development either by removing woodland or planting it with conifers as bluebells struggle under the permanent shade of evergreens. However, possibly the major threat is from the Spanish Bluebell which is very commonly planted in Wenvoe.

The two species, ours and the Spanish hybridise easily and the resulting plant is no longer our native bluebell. The two do not have to be growing close together – all it needs is a pollinating insect to fly from one to the other for hybridisation to occur. As we are surrounded by woods with bluebells all of these are at risk from the Iberian interlopers which are well within a short bee flight. So how do you tell them apart?

The native Bluebell is curved at the top and the flowers tend to grow on one side of the stem. The Spanish Bluebell is bigger and more vigorous (which is why gardeners like them) and the flowers grow on all sides of the upright stem. Our native species has a distinct, sweetish scent; the Spanish virtually no smell and the leaves are much broader. The native Bluebell tends to be a much deeper blue colour. Is it an issue?

A survey by Plantlife found that one in six woods in Britain now contains hybrid plants. What can you do to help matters? If you have Spanish Bluebells the only thing you can do is to get rid of them and that does not mean driving out and throwing them out of the car window. That is precisely how so many clumps are appearing by the roadside. They can go out with the green waste collected by the Council as the heat in the composting process effectively kills the bulb and seed. And why not plant the native bluebell? They can be readily obtained online from reputable suppliers and can be bought as bulbs from Garden Centres.

The Wildlife Group has planted quite a few in the orchards that have been bought locally and experience has been that it is better to plant bulbs in late Summer and Autumn than potgrown plants in the Spring as the latter seem to be particularly favoured by small mammals who love to dig them up.