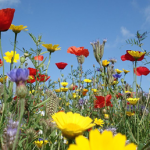 Recently I was attracted by a bay tree in a large container outside the entrance of a hotel. From a distance it seemed in very good condition but on closer examination there were signs that it was becoming pot bound.

There was a pool of rainwater standing on the surface, a sure sign of inadequate drainage. Bay needs good drainage and I think that this tree should be re-potted into a larger container making sure that there is plenty of drainage in the form of crocks plus a free-draining compost mix, (50:50 potting compost and grit.)

Over the years I’ve planted a variety of trees and shrubs in containers. At one time if I came across a seedling, I couldn’t resist growing it on – from horse chestnut to rowan, from conifers to hazel and I have learned to make sure that I have kept re-potting into larger containers and that the vital drainage is a priority. I must admit that I’ve had to chop up a plastic pot to release a shrub that had become completely pot-bound and at one time I remember having to smash up a ceramic pot. That mistake cost me dearly- some of the most attractive ceramics are quite expensive. Now I make sure to only use plastic.

I have a 10 year old Acer palmatum which I would like to keep in a pot for as long as I can and it’s already been re-potted several times. Obviously some of my trees and shrubs have reached the stage where keeping them in pots is no longer viable. These are planted here and there around the village and have thrived – notably in upper Walston Road around the Pound Lane area. Footnote: You may remember my mentioning the squirrel and the coconut. Well I did get another coconut and it didn’t take long for the squirrel or one of his mates to spirit both halves away- this time within 24 hours! There was no sign of it on the ground so how he manages to cart it away is something of a mystery!