A busy month started with the village craft fair where it was good to meet many Wenvoe residents who visited our table which was shared with beekeepers Barbara and Howard. We gave away 100 packets of wildflower seed and 30 tress including Downy Birch, Oak, Ash, Bay Sycamore. The proceeds from the raffle were generously donated to the group and we shall be using the money to produce a leaflet showing the locations of our sites along with a project with the school covering life cycles. Thank you also to individuals who made donations.

In association with Keep Wales Tidy and Wenvoe Primary School we painted a number of Yellow Fish alongside street drains in and around the school. This nationwide campaign which was 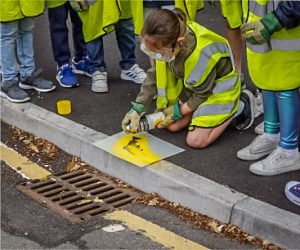 described in a previous issue of Whats On is aimed at reminding people that anything that goes down these drains goes directly into our streams, rivers and oceans causing potential pollution and poisoning fish and other wildlife. Detergents from cars cleaned on drives and litter commonly contribute to these problems.

The specimen tree walk we arranged at Insole Court as part of its Heritage Open day was well-attended. Led by Chris Powell around 40 trees were identified and described including several champions. Amongst these was Kowhai, Myrtle and a stunning Benthams Cornel. The Loquat is also unusual although you can see one in Wenvoe close to the library. If you have not visited this gem of a house in suburban Cardiff (with a cafe!) it is well worth finding the time. New rooms are being opened up in the next couple of months.

Open Farm Sunday at Goldsland Farm attracted its normal sunny weather along with many visitors thanks to the tireless efforts of the Reader family. Our stand was again shared with Barbara and Howard who talked about bees and beekeeping. We led wildlife and lichen walks and set up a colouring table for younger children. This is Wenvoe's biggest event and needs our full support.