A YEAR IN THEIR LIVES

Twyn Yr Odyn photographer Roy Carr has spent the last year developing a documentary project on sheep farming, taking an interest in the Cynon Valley where he has worked with three farms.

He has charted key events in the farming year: lambing, shearing, hay making, ‘dipping’, selling and winter grazing, capturing the interaction between people and their animals as he tells the 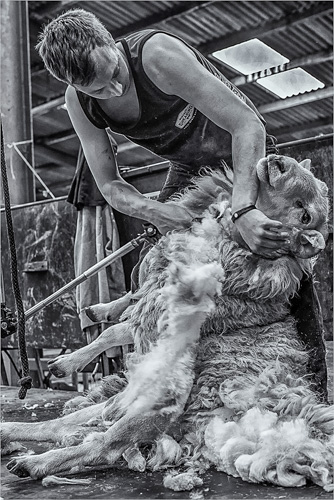 story of a farming year.

There is an intimacy about his photographs which comes from the relationship he developed with the people working the land, providing an insight into their work.

Roy explained that this posed challenges:

“I come from a landscape background. I spent hours carefully composing an image and waiting for the light. It was a slow, meditative process as I tried to communicate my connection to, and passion for the outdoors. People hardly ever featured in these photographs.

Here people are central. I wanted to capture them and their way of life, so I had to look for them and get to know them. My people skills were important as I was making photographs in their homes and they could ask me to leave.

I moved from a very slow, deliberate approach to being much more spontaneous, responding to the action in front of me. Still, the patience I had learned in landscape photography proved useful as I waited for people or animals to come into a space which had the potential to create an interesting image.

I relished the idea of creating a body of photographs and the project has gone in different directions as it progressed. In part this is because I started from a position of ignorance. As I learned about what the farmers did and how they did it, there new possibilities.”

This project features in an exhibition at the Cynon Valley Museum in Aberdare (open Tuesday to Saturday 10am until 4pm) running from 15th June until 14th July. He will also be displaying some of his landscapes.

Roy will be giving a walk-through talk about the exhibition at 2pm on each of the Saturdays that the exhibition is on. The Cynon Valley Museum is on Depot Road (next to Tesco), Aberdare, CF44 8DL, telephone 01685 886729. He can be contacted at roycarr6 @gmail.com